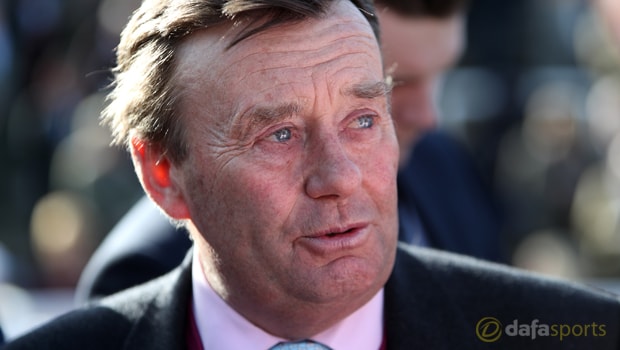 Champion trainer Nicky Henderson has warned Altior may not race before the Cheltenham Festival in March as he is set to undergo a minor wind operation.

Last year’s Racing Post Arkle winner, unbeaten over jumps, is the hot favourite to win the Queen Mother Champion Chase at Cheltenham Festival but Henderson has been forced to shelve his early-season plans.

Altior had been pencilled in for a return to action in the Tingle Creek at Sandown in early December but the seven-year-old had a wind problem detected as he stepped up his homework ahead of that race.

“He started faster work last week in the build up to Sandown and did an excellent piece with Lough Derg Spirit last Tuesday, he was actually quite brilliant, and it is quite bizarre this has come up as up until now he had shown no signs whatsoever that there was anything untoward,” said Henderson.

“However, he made a whistling noise on Saturday so we did an overland scope yesterday, which is basically galloping while being scoped, and between our own vet Dave Matterson and Geoff Lane they both concluded that he has a small issue with his wind whereby his larynx isn’t opening sufficiently.”

Whilst keen to stress the operation is not a major one, with the likes of Sprinter Sacre and Might Bite having undergone the same, Henderson admits he is not certain Altior will run before his big day at Cheltenham in March.

“Sadly this has reared its ugly head at the wrong time and there is nothing we can do about it,” he added.

“As a consequence we have been forced to miss the Tingle Creek but hopefully he will be back in time for the Champion Chase at Cheltenham in March and perhaps the other championship races in the spring.

“Whether we are able to fit in a prep race we don’t know and only time will tell; I certainly wouldn’t want to speculate.”

Altior is the 2.25 favourite to win the Queen Mother Champion Chase this season.