Nicky Henderson: Altior may go up in trip 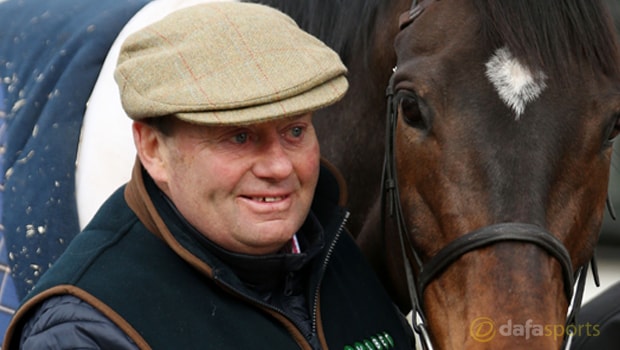 Queen Mother Champion Chase winner Altior may be stepped up in trip at Aintree next month according to trainer Nicky Henderson.

The eight-year-old is unbeaten in 13 starts over jumps and once more impressed in winning for the third year running at the Cheltenham Festival earlier this month.

Altior was however under pressure at various stages during the Champion Chase, before eventually powering clear of Min on the run up the famous Cheltenham hill.

Henderson feels he might now be looking for a longer trip, with the Melling Chase at Aintree a possibility.

The Seven Barrows handler will either go there or wait and look to defend his crown in the Celebration Chase at Sandown on the final day of the British jumps season later in April.

“He’s starting to race like a horse who may get it, but then you get another fortnight of extra time for the Celebration Chase, which he won last year, at Sandown and that’s a Grade One now so we might just wait for that.”

Henderson is also mulling over what path to take with his leading two-mile hurdlers.

Champion Hurdler Buveur D’air is bound for Aintree, while veteran My Tent Or Yours is more likely to head to Ireland having missed Cheltenham.

“Buveur D’Air, I’d be pretty sure, would be going to Aintree, whereas My Tent Or Yours might hang back and wait for Punchestown,” Henderson added.

“They were first and second last year (at Aintree) and My Tent deserves a chance. You might get better ground at Punchestown for him.”