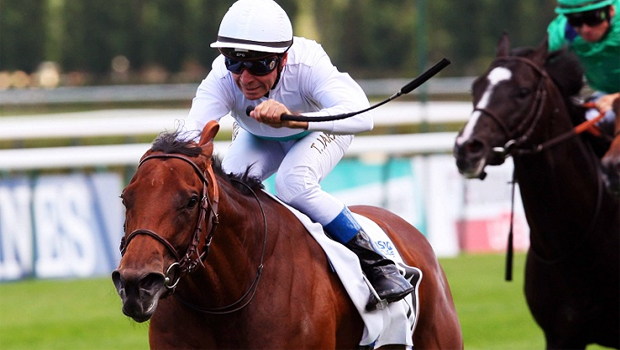 Moonlight Cloud has been given the go-ahead to race in Prix Jacques Le Marois on Sunday after trainer Freddie Head revealed filly has “never been better”.

Moonlight Cloud blew away the rest of the field, including Diamond Jubilee and July Cup winner Lethal Force, when breaking the course record to win the Prix Maurice de Gheest last weekend and has now been given the chance to complete a famous Group 1 double.

Head was waiting to see how the horse recovered from the win before making a decision for the Marois, and has now confirmed she will definitely race.

Moonlight Cloud will come up against a top-class field and will also have to run a furlong and a half further, but Head is still full of confidence going into the race.

“She’s come out of the race very well, she looks beautiful. It’s so far, so good with her as far as her campaign goes and she will definitely run in the Marois on Sunday now,” he said.

“I was very impressed with her in the Maurice de Gheest. She beat a very good horse in Lethal Force very easily and I have to say, she has never been better in her life.

“She will take a lot of beating on Sunday. She adores the track, is better than she’s ever been and you must remember she was very unlucky in the race last year, she should have won. She will get the mile.”

Moonlight Cloud could come up against Dawn Approach, Intello, Elusive Kate and Declaration Of War in the race but Toronado was not among the field of 16 at Wednesday’s entry stage.