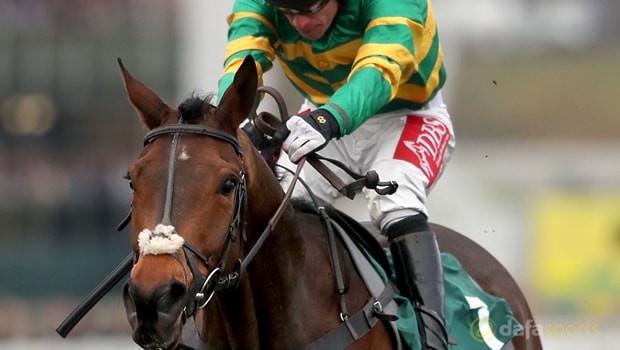 Jonjo O’Neill feels Minella Rocco is a better horse than his 2010 Grand National winner Don’t Push It and he insists top weight won’t stop him running a big race at Aintree next month.

Don’t Push It famously gave AP McCoy his fairytale success in the Aintree marathon and O’Neill has another lively contender for next month’s renewal.

Minella Rocco is set to carry top weight at 11st 10lb for the April 14 spectacular after the original top-weight Definitly Red, Irish Gold Cup hero Edwulf and Outlander were among those taken out at the second forfeit stage.

Despite that hefty burden and Minella Rocco failing to complete in two of four starts this season, the Jackdaws Castle handler feels he is equipped for a big run.

Second to Sizing John in the Cheltenham Gold Cup last season, Minella Rocco was a late withdrawal from last week’s race on account of the testing ground.

“The ground got very heavy (at Cheltenham) and, as we all know, he’s got a wind problem and that ground wouldn’t help him, so we saved him for here,” O’Neill said.

“So long as we get good ground, we’ve a good chance. “He’s won over four miles, so he just has to get another half a mile.

Top-weight isn’t ideal, but that’s the way it is and he’s a big horse, so hopefully he can carry it. He jumps well and keeps galloping, so the National was always at the back of my mind.”

According to O’Neill, Minella Rocco has the class to defy his big burden, though his hopes will come down to getting a fair share of fortune on the big day.

“You need a lot of luck and obviously a horse that jumps and stays. On paper, this fellow (Minella Rocco) would be a better horse than Don’t Push It, but everything has to go right,” he added.