Horse Racing: Tony McCoy has no plans to retire

Posted by chris schweizer on November 8, 2013 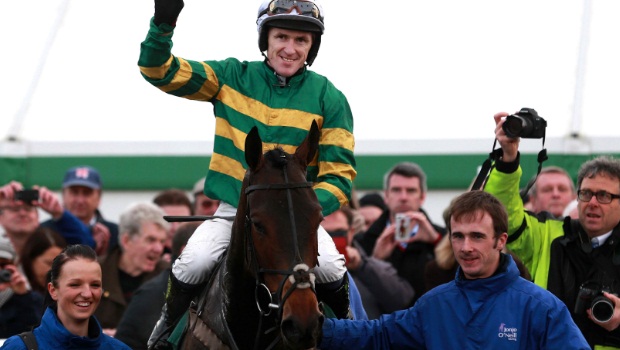 Tony McCoy insists he has no intention of retiring any time soon and wants to add many more winners to his incredible tally of 4,000.

The 39-year-old reached the milestone on Thursday when he claimed the spoils on board Mountain Tunes at Towcester.

The Northern Irishman has enjoyed a stellar career and has been crowned champion jockey on 18 occasions, while landing most of the big jumps races over the past 20 years.

Having suffered many injuries during his time in the saddle and approaching the age of 40, it is inevitable that people have started to ask the Moneyglass-born legend when he might hang up his riding boots.

But McCoy has made it clear that he has never even considered walking away from a sport that has been part of his life for so long.

“I could never have ridden 4,000 winners without loving my job and if I ever get to the point where I’m not loving it, I’ll stop,” he said. “But, at this rate, someone might have to tell me when to stop.”

McCoy is widely regarded as the best National Hunt jockey of all time and was named BBC Sports Personality of the Year in 2010 after winning the Grand National that year on Don’t Push It.

But the man simply known by his initials, AP, remains humble and wants to be treated like anyone else.

“There is no place for arrogance or complacency in racing because you are up there one minute and on your backside the next,” he added.

“I feel like I’m one of the lads in the weighing room and, I hope, they feel the same about me.”