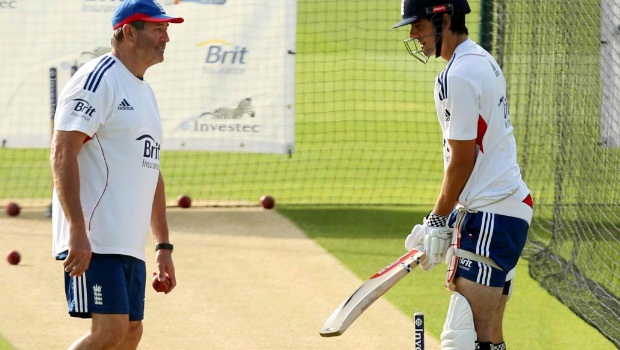 England batting coach Graham Gooch admits the team for the opening Test in Brisbane has yet to be decided after no play was possible on day three in Hobart.

The tourists had hoped to get some decent batting practice under their belts in Tasmanian against Australia A and things went well on day one with both skipper Alastair Cook and fellow opener Michael Carberry scoring unbeaten centuries.

But heavy rain prevented any play on Thursday and it was the same story on Friday as play was abandoned without a ball being bowled.

The England management will now have to decide whether to continue batting if and when the rain relents on day four or declare to give the bowlers a run-out, with just one more warm-up match remaining before the Ashes begin at the Gabba on November 21.

With only three preparatory games before the first Test it was vital for the players to get a feel for conditions and Gooch confessed that spending time in the pavilion is hardly ideal.

“It is frustrating,” he told BBC Radio 5 live. “Some of the guys haven’t played so they want to get in the middle. If you are just sitting around, it’s difficult.”

Carberry has played just one Test in his career to date but looks to have booked his spot at the top of the order for the series opener.

But Gooch, while admitting that the Hampshire man is very much in the frame, insists that the make-up of the starting XI is still a work in progress.

“He’s done his chances no harm with 150, and Joe Root batted in the middle order when he started, so those options are still open,” he added. “I don’t think the team selection is finalised yet.”