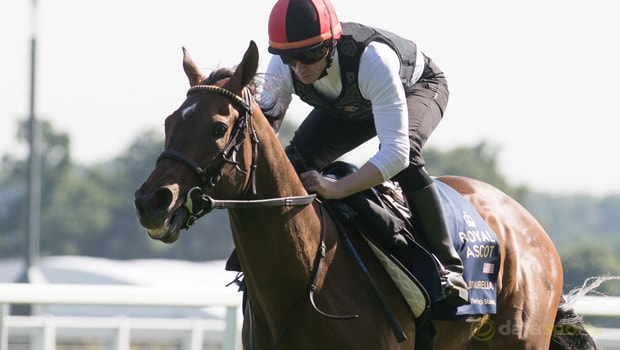 Trainer Wesley Ward feels Lady Aurelia is coming to the boil nicely ahead of her bid for a third successive Royal Ascot win this month.

The superstar American speedster blew the Queen Mary field to pieces in 2016 with an awesome display of front-running under Frankie Dettori.

Lasts summer she was back with another impressive score, this time in the white-heat of the King’s Stand Stakes.

While Lady Aurelia was beaten as odds-on favourite on her return to action at Keeneland, her trainer is very confident she has improved significantly for that outing, something Ward feels her work at home is strong suggesting.

With her liking for Ascot not in dispute, he’s eager to be back in England come mid-June.

“She’s bigger and heavier than she has been in years past and I could see in the days following that race it really was an effort for her,” Ward said.

“She put a lot into that race. “We backed off her and she bulked back up, started her work schedule and she’s like a weightlifter now. She’s got muscles upon muscles.

“Her last two breezes have been eye-openers like they have in the past and she’s got a fondness for Ascot.”

Battaash returned with victory last weekend in the Sandy Lane Stakes at Haydock and Europe’s ‘fastest horse’ is set for a second collision with Lady Aurelia in the King’s Stand Stakes at Ascot.

Battaash got rather worked up in the preliminaries last August and failed to fire in the Nunthorpe at York, where Lady Aurelia was agonisingly pipped by Marsha.

Lady Aurelia is 4.00 to win the King’s Stand Stakes, while Battaash is edging favouritism at 3.25.