Manuel Neuer will be Germany’s number one 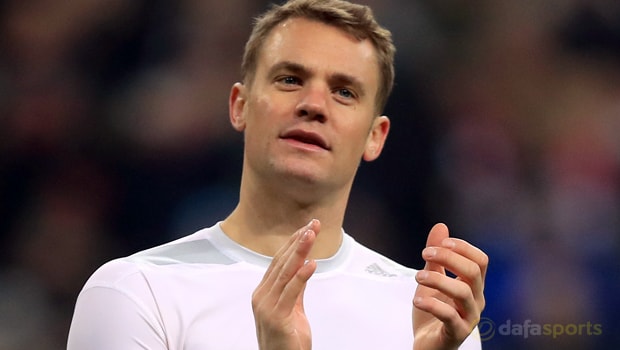 Germany general manager Oliver Bierhoff insists Manuel Neuer will be first-choice goalkeeper for the World Cup in Russia, assuming he makes the final squad on Monday.

Head coach Joachim Low picked four goalkeepers in his 27-man preliminary squad, which he will cut to a final 23 on Monday for the defence of their World Cup crown.

Bayern Munich shot-stopper Neuer, 32, missed almost the entire season after breaking his foot and undergoing surgery in the autumn.

He has been battling to prove his fitness ahead of the World Cup and appears to now be winning that fight.

According to Bierhoff, if Neuer is named in the squad on Monday, there’s no doubting who will be between the posts when Germany face Mexico in their Group F opener in Moscow on June 17.

“Manuel will go to the World Cup as our number one,” said Germany team manager Bierhoff.

“If he makes the squad then Marc-Andre [ter Stegen] will be number two. Manuel is already full on track. He does not need to get back on it.”

Germany are in Group F with Mexico, Sweden and South Korea as they attempt to defend the crown they won four summers ago in Brazil with an extra-time victory over Argentina in Rio de Janeiro.

Germany’s best defence of the World Cup was back in 1958 when they reached the last four in Sweden before going down 3-1 against the host nation in Gothenburg.

The world champions are 5.50 to retain their crown in Russia, while 2014 runners-up Argentina are 10.00 to go one better.