Posted by chris schweizer on November 9, 2018 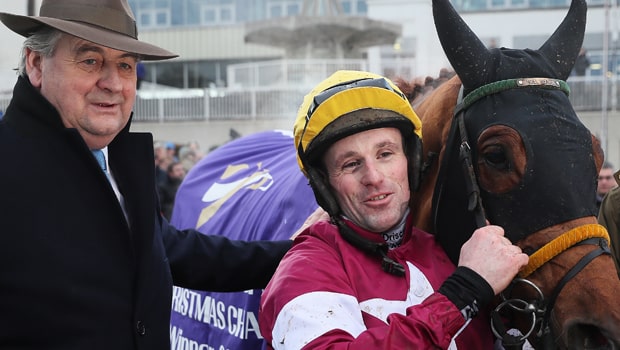 Noel Meade will give thought to running dual Grade One-winning chaser Road To Respect in next month’s King George VI Chase at Kempton.

The Gigginstown House-owned seven-year-old returned to action last weekend with a wide margin success in the JNWine.com Champion Chase at Down Royal, his second top-tier success in open company.

Road To Respect will also hold the option of defending his crown in the Leopardstown Christmas Chase over the festive programme, alongside an entry for Britain’s high-profile mid-winter Grade One staying chase.

“I haven’t discussed it yet, but I’m sure the plan would be Christmas.

He jumps a little bit left so it would make a lot of sense to go at Christmas,” said the trainer.

“He is entered in the King George, but that’s one thing about Michael (O’Leary, owner) – he doesn’t mind you making your mind up closer to the day.”

Meade admits it is no given to suggest his charge showed improved form in scoring at Down Royal on his return, but everyone connected to last season’s Cheltenham Gold Cup fourth is content with his progress.

“Sean (Flanagan) rides him most of the time and Damien McGillick, who also rides him some times, were both adamant he was in fantastic form, even though he was weighing 22 kilos heavier than he ever was before.

“I was actually worried, but the two boys kept saying he was right. I was tempted to give him another piece of work, but they said ‘no, don’t work him anymore because he’s as fit as a fiddle’ and they were proved right.”

Road To Respect is 15.00 to win the King George at Kempton on December 26.