Posted by chris schweizer on September 24, 2017 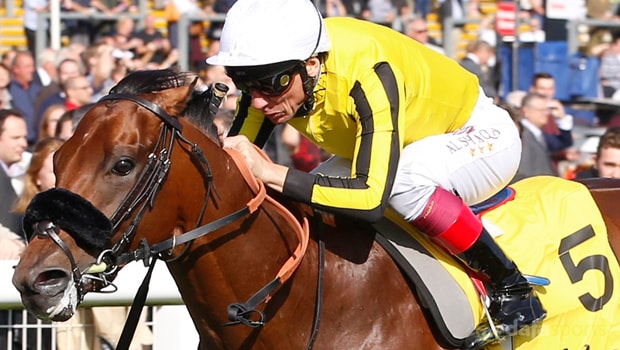 Trainer George Scott admits it will be full steam ahead to the Breeders’ Cup at Del Mar with his Mill Reef Stakes winner James Garfield.

The race has been previously won by Ribchester and Harry Angel in the last two years and Scott is hoping James Garfield can emulate that duo by going on to bigger and better things.

Under Frankie Dettori, James Garfield surged clear in the final two furlongs for a decisive win and his trainer couldn’t have been happier.

“He has danced every dance this year and has been unlucky on several occasions.

He has shown it over five, six and seven furlongs now, so he is a pretty versatile horse. He has improved physically the whole time and I am slightly lost for words really,” said Scott.

“It was all pretty smooth for Frankie. He said he was where he wanted to be, although he lost his position, he had plenty of horse and hit the line great.”

The trainer says Dettori has been urging him for some time to consider going to America and, with his Newbury success, it appears James Garfield has booked that ticket.

“Exceed and Excel’s have always gone great out there, he has got tactical speed and he will get a tight mile.

Since he sat on him at York, Frankie has always been keen to go to the Breeders’ Cup. If he ran in the first four here, that was the plan.”