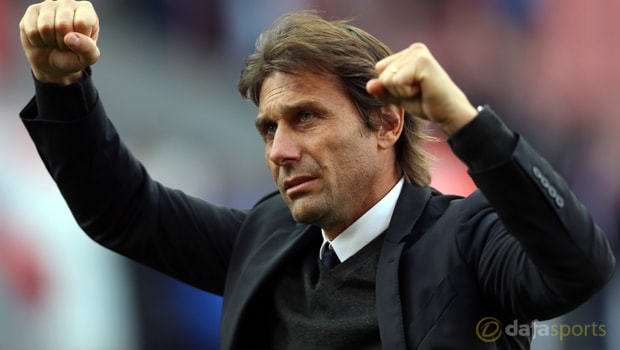 Antonio Conte may have only been in English football for one season but the Chelsea manager already knows how difficult winning away at Stoke can prove.

His Chelsea side did so emphatically on Saturday, Alvaro Morata netting a hat-trick in a 4-0 win over Mark Hughes’ team.

It was a win that gave Conte real pleasure, his side containing the hosts and taking the chances that came their way to stay on the coattails of the table-topping Manchester clubs.

Former Italy and Juventus boss Conte knows well the task that is involved in mastering Stoke on their own patch.

“Stoke are a really good team and very strong,” he said.

“It was very difficult to win here but we deserved to win the game. We started well and scored early and were in control of the game. I repeat, it’s not simple to win away against them.”

Opposite number Hughes suggested afterwards that the Premier League champions might feel a little bit flattered by the four-goal winning margin and that was an assessment that Conte did not argue with.

He also pointed to the struggles of both Arsenal and Manchester United already this season at the Stoke Stadium and emphasised he is happy with how his squad are dealing with the changes that he makes.

“We took our chances but it’s normal to come here and suffer. Arsenal lost here, Manchester United drew but we won and we deserved to win,” the Italian said.

“In the second half we scored twice and made more chances to improve the result, but it wasn’t easy.

“We are in good shape. We are rotating and the answer from my players is positive.”

Chelsea are 5.50 to retain the Premier League title this season, with Man City 1.91 to be champions.