Jack Kennedy: ‘Better than ever’ Apple’s ready to battle 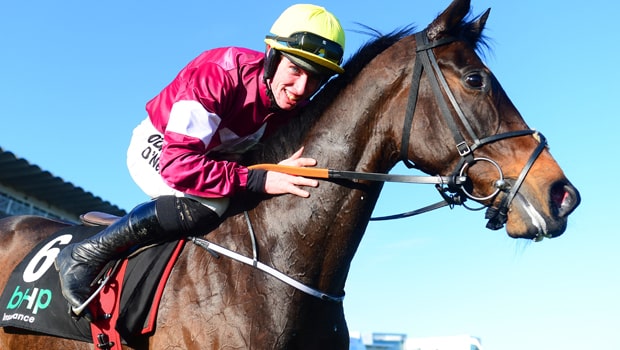 Jack Kennedy feels a revved-up Apple’s Jade will be prepared to go to war in Tuesday’s Champion Hurdle at Cheltenham and he insists big-race tactics don’t matter to the star mare.

Apple’s Jade bids to become only the third mare to win the two-mile Championship showpiece since Dawn Run in 1984.

To achieve it she will have to master the hat-trick seeker Buveur D’Air, as well as another exciting mare and Festival winner in Laurina, amongst a cast of ten runners.

Apple’s Jade has won nine of her last 11 outings, her setbacks coming last spring at Cheltenham and Punchestown when she was in season.

This term she has been flawless, winning four races over a variety of trips in splendid fashion and increasing her tally of Grade One wins to 10. She is, according to the man on board, ‘better than ever’ at seven-years-old.

“She feels better than ever this season. Certainly, since I’ve started riding her she’s never been better. The key thing with her is that she must be revved up before her races,” he told reporters.

“When she lost her way last spring, she wasn’t that way. This season, every time I’ve sat on her in her races, she’s been revved up and raring to go.

“That doesn’t mean boiling over or anything like that; just ready for the fight ahead. I’ll know when I hop up on Tuesday whether she’s revved up or not.”

She definitely doesn’t have to make it. She’s a star and so straightforward that I don’t really mind what happens,” Kennedy added.