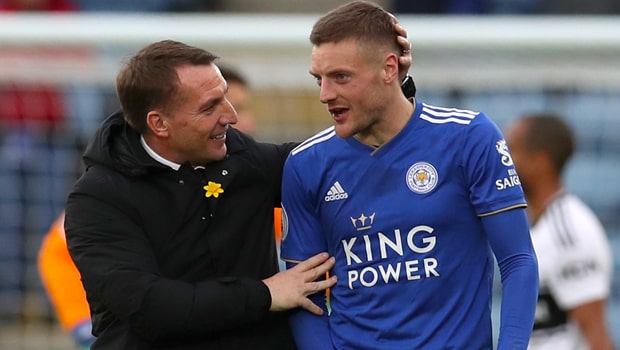 Leicester City boss Brendan Rodgers declared Jamie Vardy a ‘world-class’ striker after he fired the vital goals in a 3-1 home success over Fulham.

Struggling Fulham had threatened to take a point when substitute Floyd Ayite’s scored a scrappy equaliser early in the second half. Vardy though was the architect in chief of Leicester’s win and his late brace brought up a century of goals in a Leicester jersey for the ex-England hitman.

Vardy unselfishly teed-up a simple first-half finish for Youri Tielemans to put his side in front. He raced on to James Maddison’s perfect through ball to put Leicester back in front with 12 minutes left, his 100th goal for the Foxes, then added one more to his tally with a neat finish four minutes from the end.

While his goalscoring prowess is so well-known, Rodgers felt that his key role in the opening goal perhaps said more about what Vardy means to Leicester as a team.

The striker had previously fallen out of favour with ex-boss Claude Puel, who struggled to play to Vardy’s strengths, but that won’t be the case under his new manager.

“The first goal typifies the unselfishness of Jamie Vardy. He squared the ball to Youri Tielemans when he was on the brink of his 100th goal – that tells you everything about the player he is,” said Rodgers.

“All of a sudden they got to 1-1 and it gives them a little bit of momentum, but huge credit to the boys [for their reaction].

“He’s showed over the past couple of years that he’s a world-class striker. I’m just really glad that he’s here. He’s a brilliant focal point for the team.”