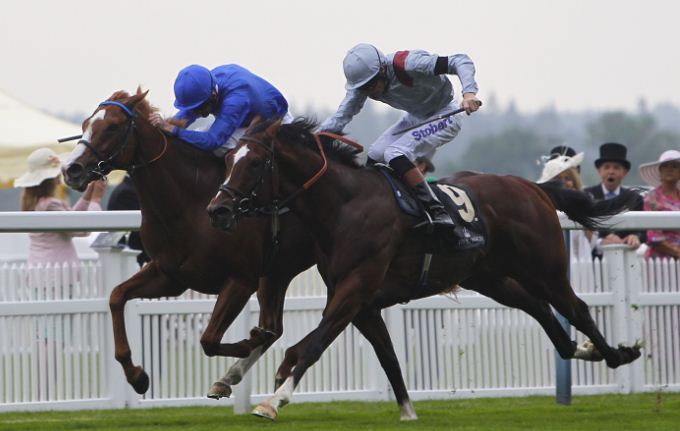 Dawn Approach has got the better of Toronado on the two occasions they have met this season but Hughes says his ride will not have to find too much to get one back.

Toronado finished a disappointing fourth in the 2000 Guineas at Newmarket, but ran Dawn Approach a lot closer in the St James’s Palace Stakes at Royal Ascot before missing out by a short head.

The two colts meet again in the QIPCO Sussex Stakes at Goodwood and Hughes is out for revenge.

“I’ve been thinking about it from the time I heard the result being called at Ascot,” he said.

“I feel there is a bit [of a score to settle]; I feel I was very unlucky at Ascot. I think an awful lot of the horse and I’d love him to show his true best.

“He weighs 530kg and he was driven sideways at the most crucial point of the race last time, so I think there’s a good argument that I only have to find a little bit.

“I presume both of us (Hughes and Dawn Approach’s jockey Kevin Manning) would like a nice, strong-run race so his horse and mine can settle. As long as it’s a nice, clean race I’ll be happy and, if I get beaten, it will be fair and square.”

Toronado supporters will also be boosted by the fact Goodwood is one of Hughes’ favourite tracks, but the jockey says as well as skill you also need luck.

“I enjoy Goodwood and I ride with confidence around there,” he added. “I feel like I know how to do the right thing around there, but that doesn’t always mean you’re getting all the luck.

“You need that on your side there now and again.”