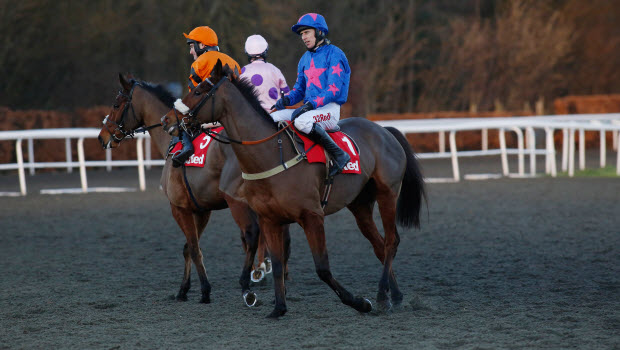 Cue Card may be aimed at the Ryanair Chase come Cheltenham in March, trainer Colin Tizzard has suggested.

The popular chaser surrendered his crown in the King George VI Chase at Kempton on Boxing Day, finishing second to stablemate Thistlecrack.

The latter defied his novice status under Tom Scudamore, powering away from his rivals on the turn for home and gaining an emphatic success in the three-mile Grade One.

While Tizzard suspects that Cue Card ultimately paid a hefty price for trying to take Thistlecrack on a long way from home, he admits that connections will need to ponder their next move carefully before electing to take on jumps racing’s newest superstar again.

He was no match for Thistlecrack but Tizzard felt the soon-to-be 11-year-old did well to hold off Silviniaco Conti and Tea For Two on the run to the line.

He could now head for Ascot in February. “He’s absolutely fine and he paid the price a bit for chasing Thistlecrack out in the country,” said the trainer.

“It was good for him to hang on for second. “The Ryanair we are definitely thinking about and we are likely to take Cue Card to Ascot for the Ascot Chase.”

Cue Card is a veteran of five Cheltenham Festivals in his outstanding career. He took the Champion Bumper in 2010, finished fourth in the Supreme Novices’ Hurdle, second in the Arkle and won the Ryanair Chase in 2013.

Back in March, he was travelling ominously well under Paddy Brennan only to fall three out in the Gold Cup won by Don Cossack.

Cue Card is 11.00 to win the Blue Ribband in March, while stablemate Thistlecrack is 2.00 favourite.