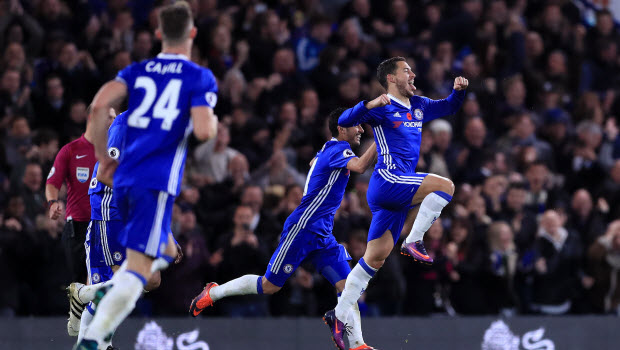 Eden Hazard says Chelsea have been fully focused on winning the title since the start of the season.

The Blues surrendered their crown in tame fashion last season but, after a slow start under Antonio Conte, have now won 12 games in a row.

Their winning run means they have opened up a six-point gap on second placed Liverpool with the halfway stage in the season now just one game away.

Hazard insists the title is always the focus for Chelsea and he is in no mood to see a winning position thrown away. “We have been talking about the title all season long.

We always want to win at Chelsea. We’re happy now. I hope we’ll continue like this through to the end of the season,” he told SFR Sport.

“We’re happy, we’re winning matches, that’s the important thing. We’re top of the league, we have to stay there. We know it won’t be easy all season, we hope it will be. But it’s up to us to do our utmost for this run to continue.”

Chelsea can make it 13 successive wins by overcoming Stoke at Stamford Bridge on New Year’s Eve.

Hazard, who struck his ninth goal of the season and the 50th of his Premier League career from the penalty spot in Chelsea’s 3-0 Boxing Day win over Bournemouth, knows how important Christmas and New Year can be.