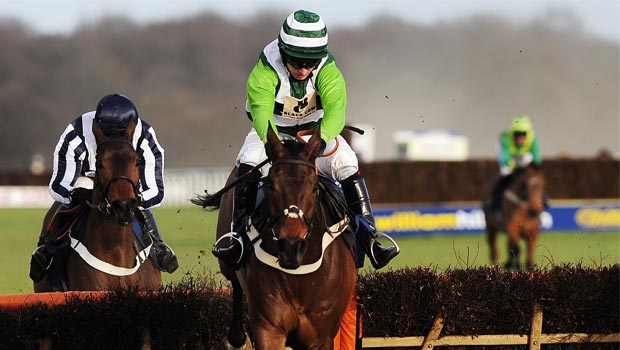 Champion Hurdle winner Rock On Ruby bids for more Cheltenham glory when he lines up in the Racing Post Arkle Challenge Trophy on Tuesday.

Rock On Ruby loves Cheltenham, having just been touched off in the Neptune Hurdle in 2011 before his famous Champion Hurdle success 12 months later. Harry Fry’s charge then chased home Hurricane Fly in 2013, and now looks to make his mark over fences.

The seven-year-old has only had two outings over the bigger obstacles, but has won both of them, and the recent spell of sunshine will have helped put ground conditions in his favour.

Fry said: “We couldn’t have wished for a better run-up on the weather front to Rock On Ruby going in the Arkle on Tuesday.

“It’s been fantastic with all this warm weather. Drying ground is a huge positive for him and we’re really excited about his chances.

“He schooled great on Friday. Noel (Fehily) came in to school all the Cheltenham runners and he looks fantastic thanks to Ciara’s (O’Connor) hard work. His summer coat’s come through and he’s in as good as form as we’ve known him for a long time. We’re very positive about his chances.

“It’s going to be a big step up into top-level novice company over fences. He’s progressed nicely in his two runs to date and obviously they haven’t been overly competitive. But he could only beat what’s been put in front of him and he’s done that well.

“We know he’s got a fantastic Cheltenham Festival record and he thrives at this time of year and it’s been exactly the same this time around. So it’s all systems go and fingers crossed it stays that way.

“I’d far rather be coming into the race on the back of two good wins on an upward curve, but I think he and Trifolium are the ones to beat. Champagne Fever will hopefully set a good gallop in front and that will suit us down to the ground. It’s going to be a fascinating race as always. It’s all systems go and we’ll keep our fingers crossed.”

Champagne Fever has not pleased everyone so far, but did a sparkling gallop under Ruby Walsh recently, so the Willie Mullins-trained grey will be a popular selection with many.

So it would appear that ‘Ruby’ will figure in the finish somewhere, but will it be Rock On Ruby or Ruby Walsh aboard Champagne Fever? We will find out at 2.05pm UK time on Tuesday.