Head-Maarek keeping the champagne on ice

Posted by chris schweizer on September 14, 2015 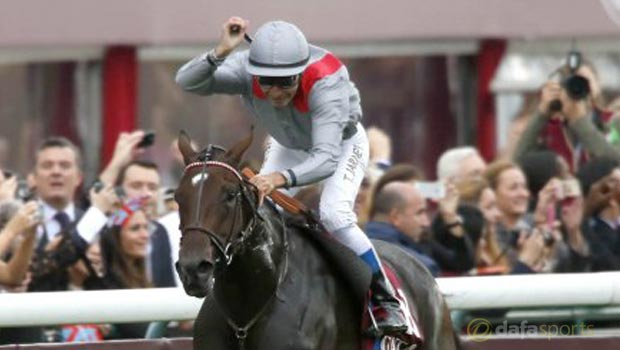 Trainer Criquette Head-Maarek says Prix de l’Arc de Triomphe favourite Treve is looking very strong ahead of the defence of her crown but is refusing to rule out the rest of the field.

The five-year-old warmed up for the Arc in style on Sunday at Longchamp, blowing away the field in the Qatar Prix Vermeille to record the eighth win of her career in 11 outings.

It was not the fact the French filly won the race that was impressive but the manner in which she destroyed the Group 1 field, streaking away from Candarliya and co with minimal effort.

As a result of her sparkling performance at Longchamp, Treve is now 1.91 to win the Arc for the third year running.

While Head-Maarek could not contain her delight at seeing her stable star perform so well, he says the rest of the field for the French classic cannot be discounted.

New Bay put himself forward as a potential contender when he was victorious in the Group 2 Prix Niel on Sunday, and Head-Maarek is wary of getting too carried away over Treve’s chances of making history.

“I don’t know what to say,” said Head-Maarek after watching Treve’s performance. “She’s a fantastic mare, she loves Longchamp and I’ve always said she is so much better going right-handed.

“It is three weeks to the Arc and obviously she is in very good form but we have seen a very good colt here already today [in New Bay] and also in England as well. The Arc will be a different matter and it’s not won yet.”

As well as 5.00 shot New Bay, Golden Horn could also prove to be an Arc contender having added the Qipco Irish Champion Stakes on Saturday to victories in the Derby and Coral-Eclipse this season.