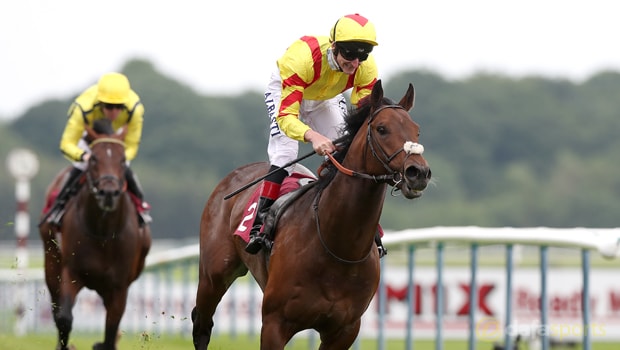 Clive Cox and Aidan O’Brien have confirmed a rematch between Caravaggio and Harry Angel, first and second in the Commonwealth Cup at Royal Ascot, will take place next month.

Both trainers have signalled their intentions to line up in the Darley July Cup at Newmarket where their sprinters will go toe-to-toe again.

The Commonwealth Cup was one of the most talked-up races of Royal Ascot and it did not disappoint, with Caravaggio preserving his unbeaten record by holding off Harry Angel in second spot to the tune of three-quarters-of-a-length.

Cox is happy with how his charge has come out of that contest and is eager for another tilt at O’Brien’s charge.

He also believes the Commonwealth Cup will be proven to have been a strong renewal by both colts and the third, Charlie Appleby’s Blue Point, who was a further half-length down.

“I am delighted with the way Harry Angel has come out of his Royal Ascot run and at this stage I am looking very positively towards sending him to the July Cup,” said Cox.

“The Commonwealth Cup was a very special race, I am sure that the first three are all top-class Group One horses, and I have no concerns with taking on Caravaggio again.”

O’Brien’s charge remains unbeaten after six starts and the Ballydoyle supremo is eager to run at Newmarket, also revealing the Caravaggio’s owners have a lofty target in Australia in October in the inaugural Everest Stakes, the richest race in the world on turf.

“The plan at the moment is we are thinking of the July Cup and then we will see after that,” O’Brien told At The Races.

“The lads (John Magnier, Michael Tabor and Derrick Smith) have an eye very much on the Everest in Australia if everything goes well at that time of the year.

“It would be unbelievable so I suppose we’ll just take one race at a time at the moment, but it would be very exciting.”