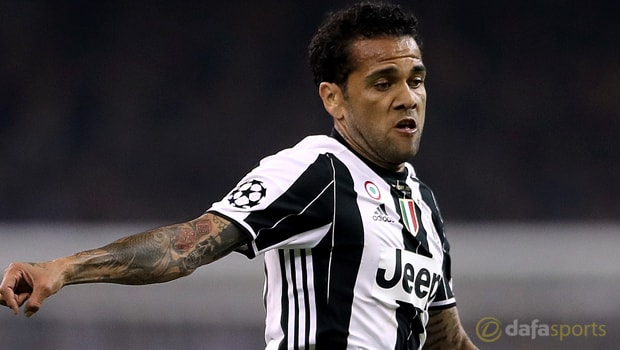 Dani Alves has confirmed that he has left Serie A champions Juventus after just one season in Turin.

The Brazilian full-back has been heavily linked with a move to Manchester City this summer to link up with former manager Pep Guardiola.

The defender, 34, joined Juventus on a two-year contract from Barcelona last June and made 33 appearances as they retained their Serie A title and reached the final of the Champions League in Cardiff.

Following the 4-1 loss to Real Madrid in the Champions League decider there were rumours suggesting Alves was seeking to cut short his stay in Italy, and he has now confirmed his time with Juventus is up.

“I would like to thank all the Juventus fans for the year I’ve had, to my team-mates who welcomed me like the professionals they are, for a club that wins and reaches finals,” Alves wrote on Instagram.

“Today our professional relationship ends and I will carry with me all of those who with love and a true heart make Juve a great club.”

Three of those Spanish titles, as well as two European triumphs, came under the watchful eye of Guardiola after the former Barca boss signed Alves from Sevilla.

With Man City having lost the likes of Pablo Zabaleta and Gael Clichy this summer, the club are looking for reinforcements at full-back and Alves has been heavily linked with a reunion with his former boss at the Etihad Stadium.

City are 3.00 favourites to win the Premier League title next season.