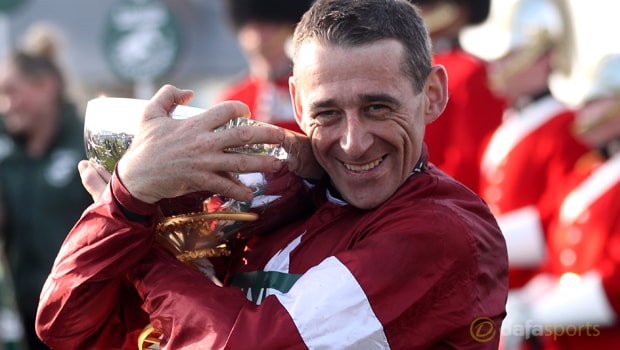 Davy Russell admits that winning the Aintree Grand National is up there with anything he’s done in his career, though he thought the win had been taken away in the dying strides.

The Gordon Elliott-trained Tiger Roll won the Grand National in a photo finish after holding off a late surge by Pleasant Company, trained by Willie Mullins.

Russell and Tiger Roll appeared to have the race sewn up after extending away from the chasers having jumped the final fence.

The gutsy eight-year-old, who last month won at the Cheltenham Festival for the third time in his career, was visibly tiring as the line approached at the end of four miles and two furlongs and Pleasant Company duly lunged at him in the final stride to ensure the verdict went to the judge.

Tiger Roll, sent off at 10/1, got the verdict from 25/1 shot Pleasant Company, leaving Russell ecstatic afterwards.

The 38-year-old has been champion jockey twice in Ireland and is set be crowned champ again this season, while he’s enjoyed many big-race wins at Cheltenham including a memorable Gold Cup on Lord Windermere in 2014. This moment topped everything he felt.

“I was thinking of all the times my dad cut the grass when I was young and it was the only time of the year I enjoyed picking it up because we would make our own Aintree fences around the garden,” said Russell.

“I’ve won this race thousands of times [in my imagination] and I’ve never won it like I’ve won it today. You watch it on television then you get a chance to ride in it.

“He really did tire under me but he was so brave. I thought I might have been done on the line, and it would have been heartbreaking but this is right up there [with anything I’ve achieved].”