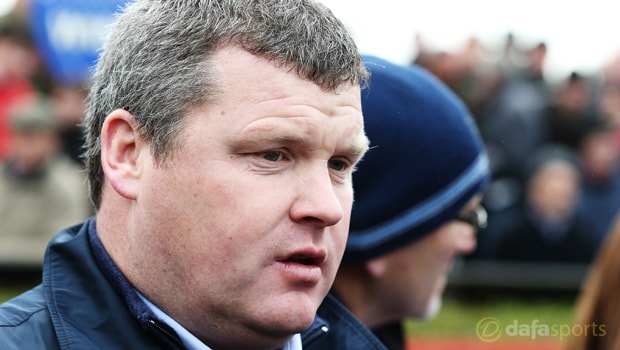 Gordon Elliott watched Apple’s Jade showcase her credentials for the Stayers’ Hurdle crown at Cheltenham and then insisted she’ll stick to the Mares’ race in March.

Apple’s Jade needed every inch of three miles to get the best of Supasundae in Leopardstown’s Christmas Hurdle, battling gamely under Davy Russell in a long run to the winning line before eventually wearing down Robbie Power’s mount in the dying strides.

The race was marred by a postscript that revealed Stayers’ Hurdle winner Nichols Canyon had suffered a fatal fall, leading to the final flight being omitted.

Apple’s Jade would not look out of place amongst the white heat of Championship battle should she go for the Stayers’ Hurdle but Elliott says it is more than likely the seven-time Grade One winner will again attempt to win the Mares’ race over two-and-a-half miles.

Meanwhile, the trainer has quickly moved to reassure regular rider Jack Kennedy that his job is safe despite a masterclass from Russell in his absence at Leopardstown.

“Davy said if he rode her again he would have got her into a battle earlier but in fairness she was in front where it mattered.

She just loves a battle and won by half-a-length at the end,” said Elliott.

“Davy gave her a great ride but she’s Jack’s mare and Jack will be riding her the next day.

He got a couple of falls and he was very sore this morning, so he couldn’t ride, but she’s Jack’s ride and he’ll be back on her the next day.

“She’ll be against the girls next time in Cheltenham, the Mares’ race is the plan. She’s just five years old and has now won seven Grade Ones.”

Apple’s Jade is the 2.00 favourite to retain her Mares’ Hurdle crown at Cheltenham while she can be backed at 8.00 ante-post to win the Stayers’ Hurdle at the Festival.