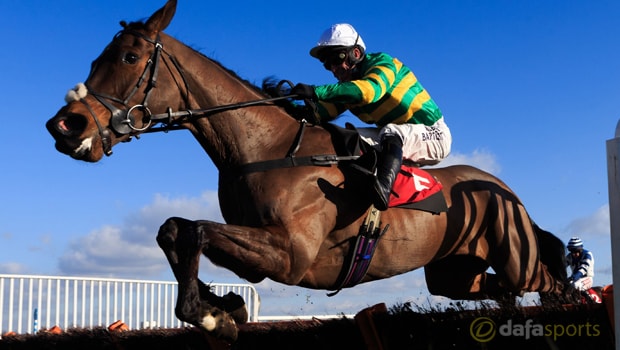 Jonjo O’Neill was left frustrated by the weather once more after he confirmed that top-weight Minella Rocco won’t be lining up in Saturday’s Aintree Grand National.

The JP McManus-owned runner was runner-up in last year’s Cheltenham Gold Cup and pulled out of this year’s Blue Riband on the morning of the race due to the very testing conditions at Prestbury Park.

The same fate has now befallen Minella Rocco’s Aintree ambitions, with connections confirming the Merseyside ground has gone against him.

“It’s very frustrating to say the least but, after talking the matter over with the horse’s connections, we have reached the decision that Minella Rocco will miss the race on account of the ground,” said 2010 Grand National-winning trainer O’Neill.

“The rain seems to keep falling and it has gone heavy on the Canal Turn so it’s going to be soft everywhere else and he just doesn’t handle that sort of ground, so we have reluctantly decided not to run.”

Minella Rocco’s defection means first reserve Thunder And Roses, who won the 2015 Irish Grand National, is guaranteed a run for trainer Mouse Morris – who is bidding to win the Aintree showpiece for the second time in three years after Rule The World scored in 2016.

After 4mm of overnight rain, the going at Aintree on Friday morning was changed to soft, heavy in places on the Grand National course as the countdown to Saturday’s showpiece intensifies.

Nigel Twiston-Davies’ Blaklion, along with Tiger Roll for Gordon Elliott, Anibale Fly for Tony Martin and the Willie Mullins-trained Total Recall are sharing favouritism for the Grand National at 11.00.