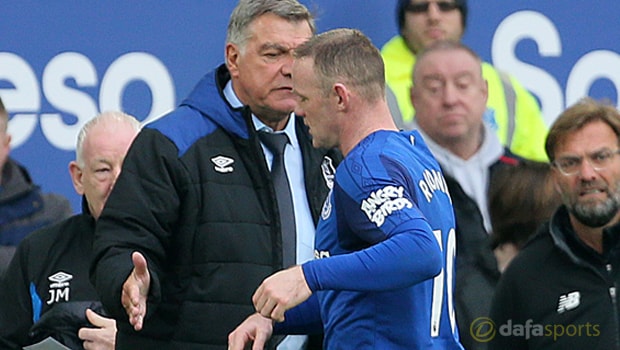 Everton manager Sam Allardyce says too much has been made of Wayne Rooney’s reaction to being substituted in last weekend’s Merseyside derby against Liverpool.

The former England boss took Rooney off after less than an hour of the goalless draw at Goodison Park, with the player barely able to contain his frustration.

Rooney, 32, is entitled to show home emotion at being taken off in such a big game for himself personally and any Evertonian, says Allardyce.

“You’re asking players to be angels. Stop it. We live in a politically correct world,” he told a press conference.

“A reaction of disappointment from a player coming off is to be expected. One would ask him not to do it in the public eye but sometimes that can’t be helped.

“As proud an Everton fan as he is, and playing for Everton, that’s where the reaction came from.”

Allardyce says he has no concerns about his relationship with Yannick Bolasie, Tom Davies or Rooney – the three players he subbed against Liverpool.

He feels England’s all-time leading scorer is enjoying his role at Everton and suggests the Toffees best chances to win the derby came late on.

“Is Wayne happy with his role at the club? It’s the role he wants to play, we’ve said it many times.” Allardyce added.

“Our tactical change was for the benefit of the team on Saturday. It’s a team game and you make a decision on the day to try and help the team to get a victory.

We did that by [making] three substitutions and continued to press Liverpool for the last 20 minutes and created our best two chances.”