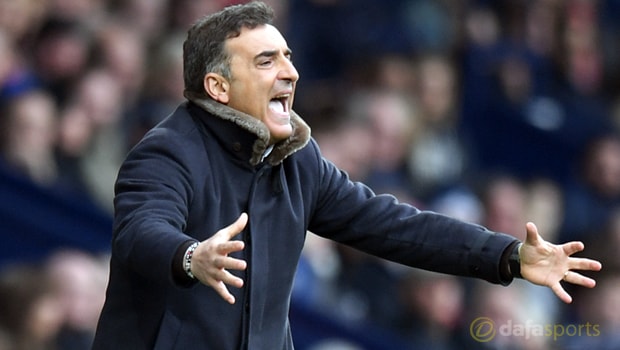 Swansea City manager Carlos Carvalhal says his players have performed well in training this week and that has put them in good shape ahead of Saturday’s important Premier League clash at home to Everton.

Swansea will be playing a home league game for the first time since March 3 this weekend and they will be hoping to continue their impressive record at the Liberty Stadium, having won their last four top-flight outings in Wales.

Carvalhal’s men have defeated Arsenal, Liverpool, Burnley and West Ham United during that brilliant run and adding Everton’s scalp to that list would go a long way to staving off the threat of relegation.

The Swans are sitting 15th in the table ahead of the weekend’s fixtures, four points above the drop zone with six matches remaining, and beating the Toffees is imperative with games against Manchester City and Chelsea coming up after.

Everton won their last away match 2-1 against Stoke City, ending a run of six consecutive defeats, and the club still has an outside chance of nicking seventh position from Burnley.

Carvalhal’s minds are far away from a top-half finish, instead focused on survival, and he believes his side have a great chance of claiming all the spoils against Sam Allardyce’s men.

“We respect Everton. They are a strong team with some fantastic players and a good manager,” he told reporters. “But we have trained very well this week and that gives us optimism.

“One or two players who have maybe been a little bit below have come up to a very good level, which is good, and all the players have been very professional.

“They are all ready to play and they have all shown very good enthusiasm in training this week.

Now we must try to win the three points.” Swansea are 2.50 favourites to pick up all three points, a draw is priced at 3.20 whilst the visitors are 3.00 to come away with a win.