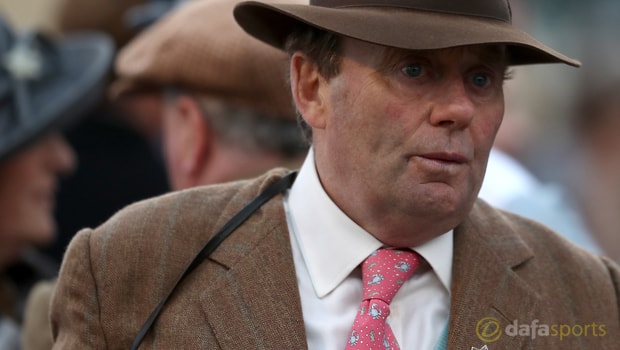 Nicky Henderson admits the returning Faugheen has given him genuine worries after his devastating show at Punchestown on Sunday.

The 2015 Champion Hurdle winner was having his first run since January 2016, an absence of 665 days, when he lined up in the Morgiana Hurdle.

The nine-year-old was sent off in front by Paul Townend for the Grade 1 contest and never looked likely to be overhauled, coming home to win by an impressive 16 lengths from another former Champion Hurdler in Jezki.

Henderson’s Buveur d’Air won the Champion Hurdle in March, with Faugheen missing the race for the second year running, and the Seven Barrows handler confesses he got the shivers watching Willie Mullins’ star turn. “Watching Faugheen the other day was fairly scary, I must admit,” he said.

“I watched it with JP (McManus, Buveur d’Air’s owner) and we just looked at each other. He (Faugheen) was frighteningly impressive.”

Meanwhile, Buveur d’Air warmed up for his intended reappearance in the Fighting Fifth Hurdle at Newcastle next month with a racecourse gallop at Newbury on Tuesday.

Henderson admits Faugheen and Buveur d’Air are not likely to square off until the spring while he insists a lot of water must pass under the bridge before March.

“He (Faugheen) will go on his route and we will go on ours. I don’t where he will go and when we will meet,” added Henderson.

“You would like to think that will be in March (at Cheltenham). You don’t want to be slamming hell out of each other practising.

“We’ve all got to get there. Willie knows that as well as I do. We all know there will elephant traps all over the place to catch the fallers.

Everything has to go 100 per cent all the way. “We will have to sharpen our pencil a bit but the pencil is getting sharper.”

Faugheen is 3.00 to regain the Champion Hurdle in March while Buveur d’Air is 5.00 to retain the two-mile crown.