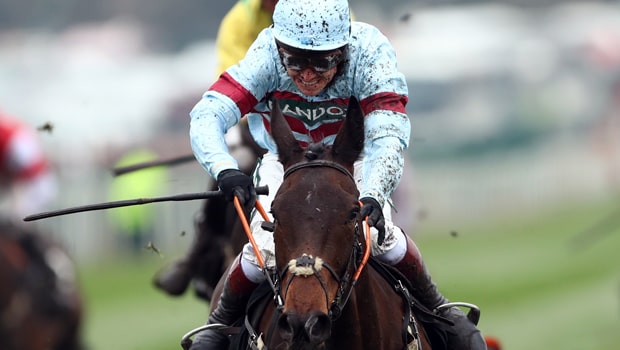 Kayley Woollacott says firing Lalor into the Racing Post Arkle at the Cheltenham without a prep run is not a cause for concern.

The budding chaser missed out on a run in the Lightning Novices’ Chase at Doncaster over the weekend due to unsuitable ground and his trainer suggests it might now be straight forward to Cheltenham in six weeks’ time.

Dynamite Dollars took the Doncaster contest for trainer Paul Nicholls, with Lalor missing a chance to settle an old score on Town Moor. He impressively beat Dynamite Dollars at Cheltenham in November on their chasing debuts, only to finish third behind the same rival in the Henry VIII Novices’ Chase at Sandown a month later.

That race was on soft ground deemed less than ideal for Lalor. Woollacott would approach Cheltenham with no trepidation should Lalor not run again before the Cotswolds showpiece.

“You’ve got to do what’s best for him and he’s shown he can do the business after a break. I’d be concerned trying to get a run in beforehand, trying to go to Warwick for the Kingmaker, and then getting him to Cheltenham in the right shape. He’ll probably have a racecourse gallop though.”

Dynamite Dollars added the Wayward Lad Novices’ Chase at Kempton over Christmas to his CV, busting the unbeaten chasing record of Kalashnikov in doing so, before his Doncaster win.

Woollacott believes too much may have been made of Lalor’s Sandown setback and she is looking forward to the Arkle.

“It was very soft at Sandown and he still ran creditably. If he’d have won a little novice chase at Uttoxeter and was then third in a Grade One we’d all be looking at it differently, but he was so good at Cheltenham in November and that’s how we hope to get him back there in March,” she added.

Lalor is 6.00 favourite to win the Arkle, with Dynamite Dollars currently 7.00 and Kalashnikov, second in the Supreme Novices’ Hurdle last season, also a 7.00 chance.