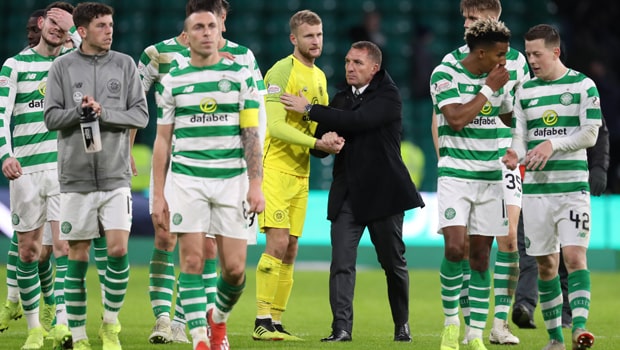 The Bhoys – 81.00 to win the Europa League – may have started the season slowly but it has been business as usual over the last few months and they sit happily at the top of the table.

Saturday’s victory was their fifth in six Premiership outings, having lost the Old Firm derby clash with Rangers in December, while they have also picked up four clean sheets during that run.

Kilmarnock’s draw at Aberdeen on Saturday has allowed Celtic, who have a game in hand on their rivals, to open up a three-point gap at the summit.

Callum McGregor put Celtic ahead late in the first half but Hamilton defended resolutely to keep the defending champions at bay for the majority of the second period.

Celtic remained patient and eventually got their reward when Ryan Christie and Scott Sinclair netted in the final 15 minutes to wrap up a 3-0 triumph.

Rodgers was pleased to see his men stay honest on a difficult afternoon and feels they are starting to build some good momentum after the winter break.

“We created a lot of chances in the game. More than we’ve done in the other games,” Rodgers said.

“I give credit to Hamilton as well, they are very hard to beat. “Their defensive block was very tight. “And in these types of games sometimes you have to wait until the last 20 minute when teams start to tire.

“I’m very pleased with the performance at the back end of a week when we’re back into the season and it was going to be important for us to win and win well. “I thought it was another good game for us.”