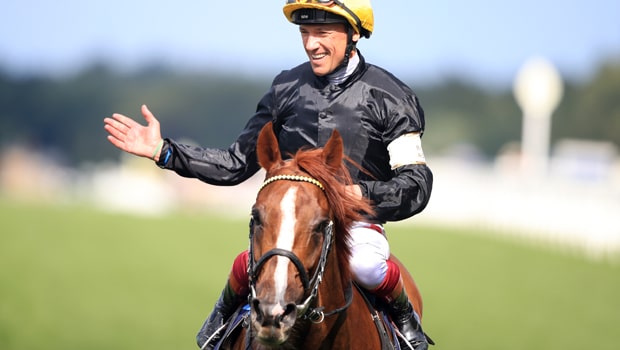 Frankie Dettori rode a sparkling four-timer at Royal Ascot on Thursday afternoon, including retaining the Gold Cup on board the superb Stradivarius for trainer John Gosden.

The Italian, aged 48, landed the first four races on the card and had the Ascot crowd briefly dreaming of history when he swept clear in the Britannia Stakes on Gosden’s Turgenev, only to be reeled in by Harry Bentley on Biometric as Dettori settled for second-best in the fifth of six races.

On a remarkable afternoon memories of 1996 were stirred when Dettori famously rode all seven winners on one card at the Berkshire track. Dettori’s afternoon got off to an ideal start when he steered A’Ali home for a slender success in the Norfolk Stakes, giving long-time friend Simon Crisford a welcome Royal winner.

The Sir Michael Stoute-trained Sangarius got first run on the field and landed the Hampton Court Stakes from the rather luckless favourite Fox Chairman as Dettori doubled up.

Star Catcher was duly well-backed for the Ribblesdale Stakes and Dettori produced the filly to deny favourite Fleeting for Ryan Moore and Aidan O’Brien before Stradivarius retain his Gold Cup crown.

The star stayer was winning his seventh successive race and gave Dettori his seventh career win in the Gold Cup, with the jockey paying tribute to all that played a part in Stradivarius’ success. “What a horse, he got me out of trouble. He’s the horse for the big occasion and people love him,” said the winning rider.

“It’s great for everyone connected with the horse – every time he runs he delivers. “He doesn’t know how to lose and all I have to do is get him among the others and he does the rest. He is fantastic horse and he does the rest – and what a trainer.”

Dettori’s mount Advertise is 8.50 to win the Commonwealth Cup on Friday, with Aidan O’Brien’s Ten Sovereigns 2.25 and Crisford’s Jash trading at 5.50 to win the Group One sprint.