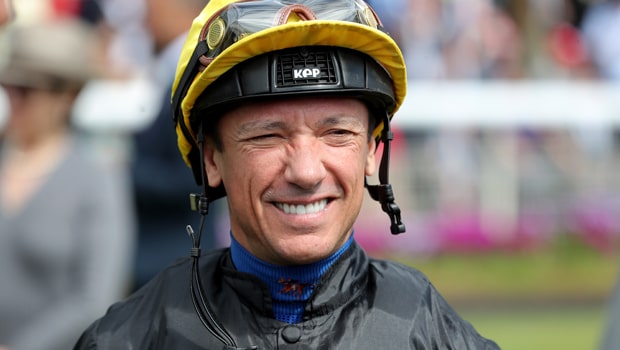 Frankie Dettori is delighted to have picked up the ride on the Aidan O’Brien-trained Circus Maximus in Saturday’s Investec Derby at Epsom.

The Italian ace has twice before won the world’s premier Classic, on Authorized in 2007 for Peter Chapple-Hyam and eight years later on the John Gosden-trained Golden Horn.

Dettori has picked up a ‘spare’ this year as part of a seven-pronged assault from Ballydoyle trainer O’Brien among a field of 13 for the Epsom showpiece. Given O’Brien’s prowess – he has won the race six times – and the strength and depth of his string, Dettori is very happy with his mount.

Winner of the Dee Stakes at Chester last month, Dettori is confident that Circus Maximus will stay the Derby trip of a mile and a half. While he can race lazily, Dettori hopes his new headgear will alleviate that and his two-year-old form with 2,000 Guineas hero Magna Grecia entitles him to plenty respect.

“I have picked up a spare ride on Circus Maximus in the Derby. He looks like a horse who is a bit lazy. He’s never going to be flash,” said Dettori.

“I spoke to Aidan O’Brien [on Thursday] morning, and the horse will wear cheekpieces just to sharpen him up a little bit because he is very laid-back.

“One thing we do know is that he stays really well – and if you look at his Futurity Stakes form, he is red hot with Magna Grecia and Phoenix Of Spain.

“The race does looks wide open. You can make a case about most of the runners – but I am pleased with mine, who will most definitely stay the trip.”

Circus Maximus is 15.00 to win the Epsom Derby, with the O’Brien-trained Sir Dragonet favourite at 3.75 to score under Ryan Moore.