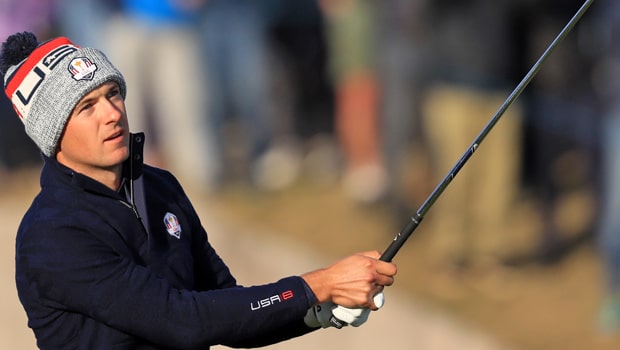 Jordan Spieth was delighted with his six-under-par effort that left him just one shot off the lead after the first round of the Memorial Tournament.

After a poor run of form by his previous high standards, Spieth has shown signs of a revival, with back-to-back top-10 finishes including a share of third at the US PGA Championship.

Changes to his swing seem to be finally paying off as the Texan carded five birdies, one eagle and just one bogey during his first 18 holes at Muirfield Village to reach -6.

The 25-year-old’s putting marked him out from the rest during a purple patch in which he claimed three majors, with many pundits feeling he will win many more of the big four titles before the dust settles on his career.

For now it is just baby steps to try and rediscover his touch and Spieth (6.00 to win) was pleased with how things went in Ohio.

“Six under around Muirfield I’d take any day of the week, no matter what form you’re coming into it with,” he said. “I felt like I hit more fairways today, gave me some more opportunities, and the putter stayed hot.”

Ryan Moore (12.00) leads on seven-under after a flawless 65 while five players share third spot on -5. Germany’s Martin Kaymer (41.00) is among them alongside Marc Leishman (17.00) of Australia while Russell Knox of Scotland is in a group on four-under par.

Kaymer, a former world number one, is now down at 186th in the rankings but a share of eighth at the British Masters was a step in the right direction.

The former Ryder Cup ace will now be looking to continue his resurgence when round two gets under way on Friday.