Footpad next up for dominant Willie Mullins 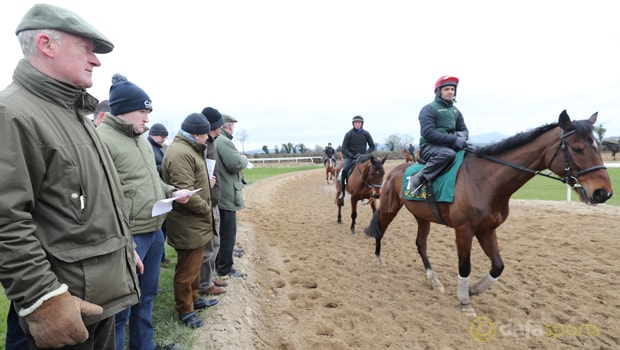 Racing Post Arkle winner Footpad will bid to continue the domination of Willie Mullins at Punchestown on day three of the festival in the Ryanair Novice Chase.

Mullins, seeking to overhaul Gordon Elliott and retain his champion trainer title in Ireland, went into the five-day showpiece trailing by more than €500,000 in prizemoney to the would-be champion.

The Closutton supremo was simply peerless at Punchestown on Wednesday as he saddled six winners from the seven races, including the Gold Cup with Bellshill, who beat stablemate Djakadam into second spot.

It all added up Mullins taking over from Elliott in the trainers’ championship race with only three days of the season left to go.

Daryl Jacob, retained rider for owner Simon Munir and Isaac Suede, was on board when Footpad made a winning start over fences at Navan earlier this season.

Ruby Walsh, number one jockey for trainer Mullins, has taken over since but he is injured and Jacob is relishing his chance.

The jockey feels Footpad, already proving much better over fences than he was as a hurdler, can go to the very top in his new discipline.

“With Ruby not being available I get the chance to sit on him again and obviously I’m looking forward to it,” he said.

“I rode him at the start of the year, so let’s hope he rounds off the season in good style.

“He’s very good, he’s a very talented horse. He’s a good jumper and a good traveller. He’s uncomplicated and I think he could go all the way to the top.”

Footpad is he 1.40 favourite to win the Ryanair Chase at Punchestown. Henry De Bromhead’s Petit Mouchoir, who had his number over hurdles but has so far proved no match in two meeting this term, is available at 6.50.