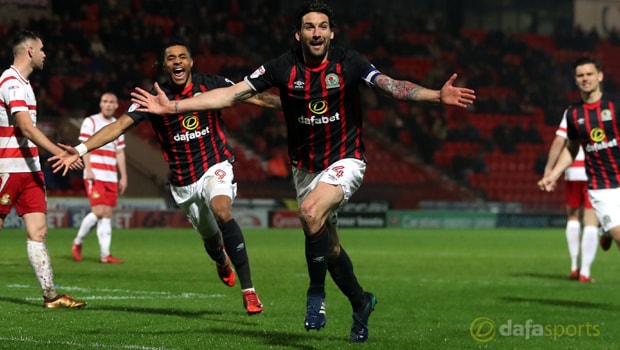 Blackburn Rovers captain Charlie Mulgrew says he is “so proud” of his team after automatic promotion to the Championship was confirmed on Tuesday night at Doncaster.

Rovers, who were relegated from the Championship last season on goal difference, arrived at the Keepmoat Stadium knowing victory would guarantee a place in the top two and an instant return to the second tier of English football.

It was a tight affair but the defining moment came 10 minutes from time when the skipper, who arrived from Celtic back in 2016, found the back of the net from Bradley Dack’s cross, securing a 1-0 win.

With two games remaining, Blackburn still have the chance to win the League One title, having moved to within one point of leaders Wigan Athletic after The Latics could only manage a 1-1 draw away at Bristol Rovers.

Tony Mowbray’s men are 5.00 to win the title while Wigan, who have also bounced back to the Championship at the first time of asking, remain the favourites at 1.14.

Scotland international Mulgrew, who has scored 14 goals in 39 league appearances this season, has praised the effort and determination shown by his side across the campaign.

“I’m so proud. There were boys who stayed here who felt there was a job to be done this season,” he told the club’s official website.

“It would have been easy for a lot of boys to leave, push to go somewhere else.

“But we stuck together, stayed here and felt we owed the club something and it was all for this moment. We’re delighted to do it for all the staff, the fans, and us as players. We’re a real unit here.”