Tony Bellew ‘knows what to expect’ in David Haye rematch 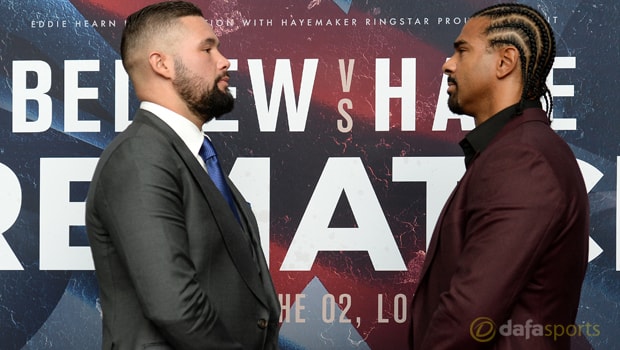 Tony Bellew has warned David Haye to expect a different version of himself for their heavyweight rematch in London next weekend.

The pair will square off at the O2 next Saturday after their bout last year was hailed as one of the great modern-day heavyweight clashes. Liverpudlian Bellew won that clash, though Haye was forced to try and counter a severe knee injury through much of the bout.

Bellew, a former cruiserweight world champion, says he was like a ‘fat heavyweight’ on that night, having deliberately piled on the weight in an attempt to absorb the expected blows from his opponent.

This time he says things will be different after he learned during that fight how he needs to be prepared physically.

“Last time I was a fat heavyweight. This time is a completely different ball game,” he said.

“Last time I had the belief in my mind that I had to be heavy, to absorb what he was going to dish out. “It wasn’t until the seventh round that I realised that was a big mistake.

This time I understand exactly what’s needed.” Bellew insists his fitness has drastically improved since their first fight, something he insists is borne out in the figures during his training camp.

Haye weighed nearly a stone heavier than Bellew for their first fight, but the latter is confident he now has the correct formula to back his victory up.

“The training levels have been taken up. All my numbers have gone up from my stats. I’m 35, so it doesn’t get any easier, it gets tougher,” he said.

“But the fact my numbers are still going up, show that I’m still improving. I’m still getting physically better with each and every camp.”

Bellew is 2.88 underdog to add a second win over Haye, who is favourite at 1.44 to gain his revenge in London on Saturday May 5.