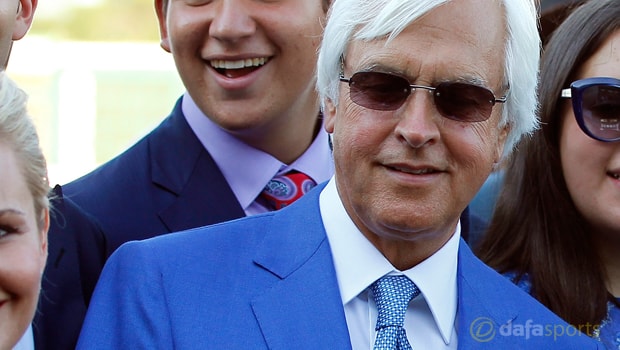 All roads lead to Churchill Down for Saturday night’s Classic (23:50 BST) as Hall of Fame trainer Bob Baffert targets a fifth win in the Kentucky Derby with 5.00 joint favourite Justify.

No horse has won the Derby after not starting as a 2-year-old since Apollo in 1882, leading to what American racing observers have called the ‘Curse of Apollo’, and the 65-year-old Triple Crown winning trainer played a diplomatic hand when asked about the colt’s chances.

“The thing about the Kentucky Derby, you have to have the right horse. It just happens. You can’t force it,” said Baffert, who also saddles 21.00 outsider Solomini.

“All of a sudden, you have good horses and you’re there. So I’ve been really fortunate to have some really good horses.”

The 65-year-old first won the Kentucky Derby in 1997 with Silver Charm and followed it up 12 months later Real Quiet, before further success in 2002 with War Emblem and American Pharaoh in 2015.

This time around he will try to dethrone big rival Todd Pletcher, who last year masterminded victory for Always Dreaming on a Wet/Fast track.

Justify exited the maiden ranks at Santa Anita in February and won when facing rivals as a winner for the first time in Allowance Optional Claiming company at the same track on March 11 before completing a hat-trick with victory in the Grade 1 Santa Anita Derby on April 7, beating the two-time Grade 1 winner and re-opposing Bolt d’Oro [11.00].

Sharing favouritism is the Aidan O’Brien-trained Mendelssohn, the mount of Ryan Moore, but quite what he has left in the tank is open to question.

The son of Scat Daddy has been clocking up the air miles with wins in Dundalk and Meydan within a matter of weeks and is on course for a four-timer.

Florida Derby winner Audible for Pletcher is next in the betting at 7.00 and barn-mate Magnum Moon, who won the Arkansas Derby last month to make it four unbeaten, is quoted 9.00.

Bolt d’Oro and Good Magic are both currently trading 11.00 and Vino Rosso is priced 15.00, while Hofburg is quoted 17.00 and it is bigger the remainder.