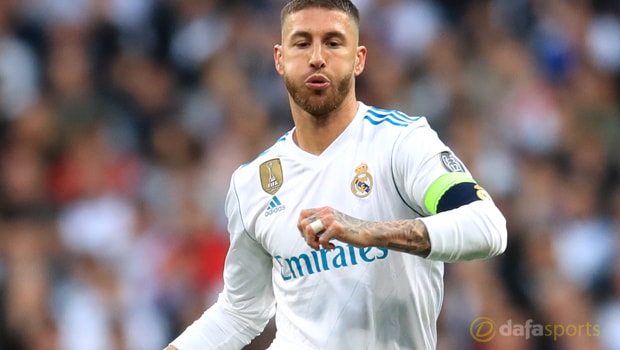 Sergio Ramos says Real Madrid are not losing sleep over the prospect of facing Mohamed Salah and are targeting a third straight Champions League final win.

Egypt international Salah has scored an astonishing 43 goals so far this season in all competitions – including a brace in the semi-final first-leg against Roma to secure Liverpool a 7-6 aggregate success and a place in the final of Europe’s marquee club competition.

His form has seen him mentioned as a potential Ballon d’Or contender, along with Ramos’ team-mate and five-timer winner, Cristiano Ronaldo, but the Spain defender says he does not fear the 25-year-old.

“We have seen what Salah can do this season, but he will just be one of 11 players we face against Liverpool,” he told reporters.

“Throughout my career, I have faced the best forward players in the world – many of them who are considered among the greatest ever.

The 12-time competition winners and 1.73 favourites in the outright winner betting are on course for a hat-trick of Champions League trophies and it will be Los Blancos’ only hope of silverware having seen bitter rivals Barcelona secure the La Liga title.

“We can’t be arrogant but we can be confident. We know it is in the DNA of Real Madrid to win the Champions League,” veteran defender Ramos said.

“We are ready to defend our title for a second time – we won’t let it go easily.”

Real Madrid are currently priced 2.25 to win in 90 minutes and the draw outcome is quoted 3.60, while Jurgen Klopp’s men are available to back at 2.88.