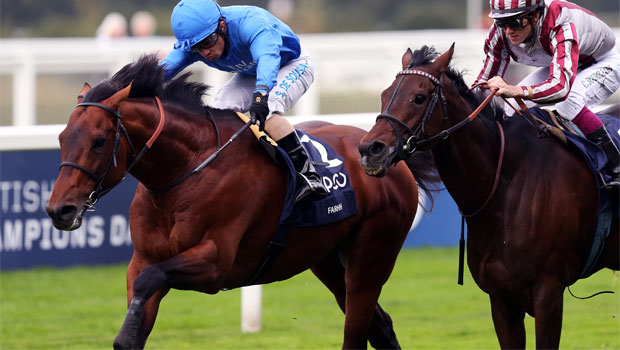 Farhh secured a thrilling victory over Cirrus Des Aigles in the Champion Stakes on Saturday, edging the ante-post favourite and Ruler Of The World to claim the main prize on Britain’s richest raceday.

The five-year-old, who has been plagued with injury throughout his career, won the Group One Lockinge Stakes over a mile at Newbury back in May, but this was his first outing since then due to injury.

However, his stamina betrayed this as he beat Cirrus Des Aigles by a neck, with Ruler of the World, winner of the Epsom Derby, half a length further back.

After the race, trainer Saeed Bin Suroor confirmed that Farhh will now be retired to stud, saying: “He’s a great fighter – every year he has had problems but he’s a great horse and I’m so happy.”

Meanwhile, Godolphin’s retained rider, Silvestre de Sousa, also couldn’t hide his delight. He said: “He travelled like a dream, and like the winner, through the race.

“I was concerned but he’s a marvellous horse and I’m delighted.”

Olympic Glory comfortably won the Queen Elizabeth II Stakes, with Top Notch Tonto and Kingsbarns second and third respectively. Dawn Approach, winner of the 2000 Guineas, faded badly and could only finish in fourth.