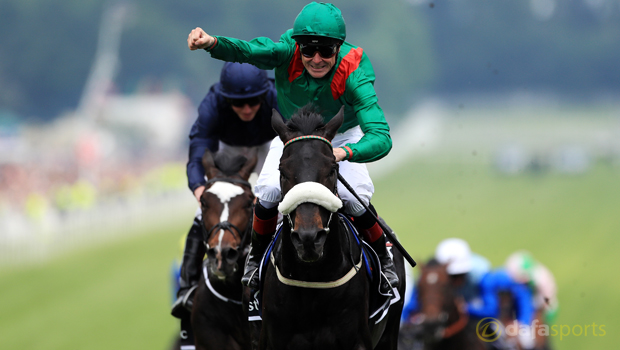 Dermot Weld is slightly concerned about the well-being of Epsom Derby winner Harzand as he prepares to try and complete a double in the Irish version at the Curragh on Saturday.

Racing fans are relishing the prospect of a mouthwatering rematch between Epsom hero Harzand and runner-up US Army Ranger, with the third horse home, Idaho, also scheduled to line-up.

Weld, however, says he will potentially be waiting until race day before committing his Aga Khan-owned colt to the Curragh Classic.

Weld admits he would have like an extra week in order to have Harzand in peak condition but, with ground conditions set to be in his favour, it looks likely he will run at the Curragh. “I think he’s putting his weight back on and perking up.

He’s moving very nicely and provided we’re satisfied with him on Thursday at declaration time, he’ll run on Saturday. The ground should be all right,”

Weld said. “My only worry is that he had a tough race and it took a lot out of him. It is definitely coming a week sooner than I’d like. The final decision will be made on the day of the race.”

Harzand underwent a brief course of antibiotics following his Epsom success at the beginning of the month but his trainer is content he is back on track now.

“I’m satisfied with the horse, he had a tough race at Epsom and he’s just taken time to come out of the race, as you can understand,” he told At The Races.

“He’s a horse that gives his all, he’s a very courageous horse, and it just left its mark on him for the first week, but we’re more happy with him now.”