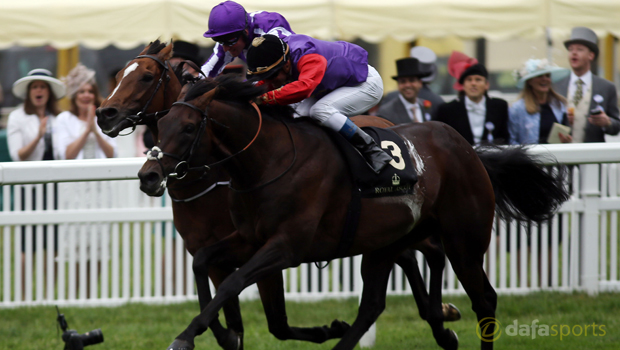 The Sir Michael Stoute-trained Dartmouth has been supplemented to run in Saturday’s King George VI And Queen Elizabeth Stakes at Ascot.

Owned by Her Majesty The Queen, Dartmouth has won all three starts this season, including last month’s Hardwicke Stakes at Royal Ascot.

The mile-and-a-half contest on Saturday however represents his first tilt at a Group 1 prize.

With the race seemingly lacking depth this year, connections have decided to supplement Dartmouth and give him his chance on the big stage.

The Queen’s racing advisor, John Warren, says the horse has been thriving since his Ascot success last month and he feels Dartmouth merits a try at the top level.

“The horse is in exceptional form and the trainer has been delighted with his progress since Ascot,” he said.

“With that side of things going so well, we felt he was a worthy candidate.”

Ryan Moore rode Dartmouth on his first two starts of the season, including when gamely clinging on over 1m5f to win the Group 3 Ormonde Stakes at Chester in May.

Olivier Peslier took over at Ascot last month when Moore elected to partner stablemate and favourite Exosphere in the Hardwicke.

It was Dartmouth that had all the answers however, holding off a late challenge from Aidan O’Brien’s Highland Reel – who is also set to run at Ascot on Saturday.

Warren feels a repeat of that course and distance form wold give Dartmouth a big chance of victory on Saturday.

Roger Varian’s Postponed is likely to go off favourite to repeat last year’s win in the race. Dartmouth on the other hand would hand Stoute a record sixth win in the race, six years on from Peslier steering Harbinger to victory.

“As he has grown up and matured he has just become so reliable,” Warren added.

“He’s won all his three races this season and has progressed each time, and he deserves to run at this level. “If he produces his Royal Ascot form on Saturday then I think he’ll run a mighty race.”

Dartmouth is 6.50 to win the King George VI And Queen Elizabeth Stakes while Postponed is 1.50.