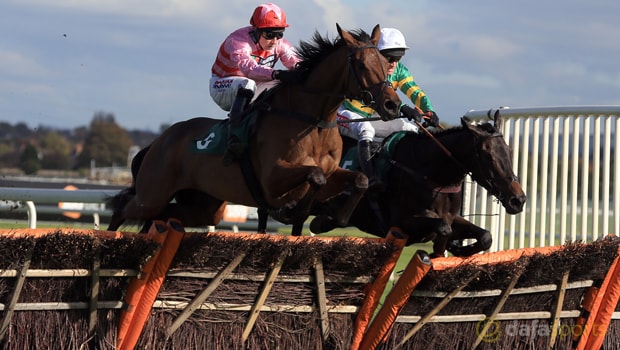 Dan Skelton has reported connections are “very excited” about the chances of Robin Roe in the Betfred Challow Novices’ Hurdle on Saturday.

The five-year-old heads to Newbury currently trading the 2.88 market leader to secure a hat-trick and land the feature race.

The former point-to-point raider put himself on the map with victory in the 18-runner Executive Hire Still Celebrating Show 10 Standard Open at Warwick in March and franked that success with an encore win on his debut over hurdles in October in the Mobile Casino At 188Bet Maiden Hurdle at Aintree, beating subsequent dual winner No Comment by 12 lengths.

Skelton revealed connections always had this year-ending eight-runner Group 1 in mind and are bullish about his chances of landing a treble.

“We’re very excited about running him,” said the Alcester-based trainer. “He’s obviously only had the one run over hurdles, but he’s done everything we’ve asked of him at home since.

“It’s a big day and we’re looking forward to it.” Market rivals include the Alan King-trained French recruit and recent Sandown scorer, Messire Des Obeaux, available to back at 4.50, while Irish raider Baltazar D’Allier is a contender for trainer Gordon Elliott off the back of his debut win at Naas and is available to back at 6.00.

Colin Tizzard, who has saddled the likes of Cue Card, Native River and Thistlecrack to success in the spring festivals, sends out his 150,000 euros purchase Elegant Escape hoping to cap a stunning calendar year.