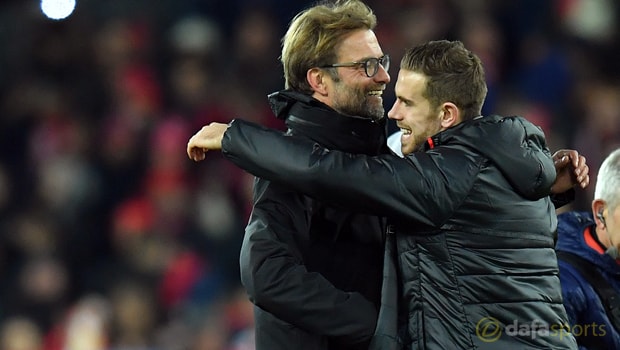 Club captain Jordan Henderson says he is in no doubt Liverpool are going the right way to becoming genuine Premier League title contenders.

The Merseysiders can make a huge statement in their efforts to win a first domestic crown since 1990 by beating fellow hopefuls Manchester City at Anfield later and Henderson says a win would strengthen their chances under manager Jurgen Klopp.

The German was denied his first silverware with his new club in the finals of the League Cup and Europa League last season but Henderson is convinced the club is heading in the right direction and says they have made huge strides under the leadership of the former Borussia Dortmund coach.

“He’s a fantastic manager. A great person. There’s such a good atmosphere in the camp,” the England midfielder told The Telegraph.

“He’s got a great balance between when to be relaxed and when we need a kick up the backside. We all look up to him.

“The man-management, the tactical stuff is outstanding and we can see the benefit. I’m sure it will just get better and better and he will be very successful.”

Liverpool are without a major trophy since the 2012 League Cup but Henderson says he feels they will not have to wait too much longer.

The 26-year-old says the players have learnt the harsh lessons of defeat in two finals last season and are determined to kick on.

He said: “We have reacted well from the two finals we lost because that can affect teams. Hopefully if we can get in that position again we will have more experience of how it feels when you don’t win and use that.

It’s no good winning one trophy and that’s it. You have to want to improve – I keep saying that and maybe it’s boring – but that’s what it is about.”

Liverpool are currently priced 2.38 in the match betting to beat City and the draw outcome is quoted 3.50. Manchester City are available to back at 3.00 in the 90 minutes market.