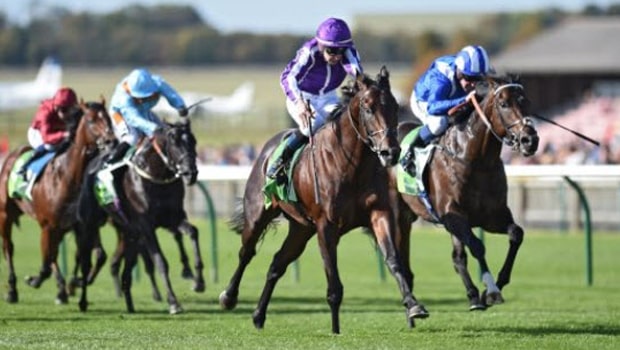 Connections have revealed they have yet to decide on which race to enter Jash at Royal Ascot next month.

The three-year-old was last in action on May 18, when winning the King Charles II Stakes at Newmarket.

Jash got the better of Azano, Watan, Far Above and Glorious Lover on that occasion as he won the third race of his career. The bay colt has lost just once so far and Simon Crisford’s charge has a number of options going forward.

He could run in the Group Three Jersey Stakes or step back up to Group One level for a shot at the Commonwealth Cup.

Confirming their options, Angus Gold, racing manager to owner Sheikh Hamdan Al Maktoum, said: “The targets are either the Commonwealth Cup or the Jersey Stakes. Talking to Simon Crisford, he has come out of the race well.

“Some people have said that he didn’t stay the seven furlongs, but then he has never looked an out-and-out six-furlong sprinter.

“As a physical specimen, he always looked like he would go further, but you can’t deny he didn’t pull away from them at Newmarket, which we hoped to see.

“I’m sure he is going to be better (for the run), as he is a big, stuffy horse and took a long time to come to himself during the spring.

“Sometimes they just need the discipline of a race to get back to it.”

Ten Sovereigns is currently the favourite for the Commonwealth Cup at odds of 3.00, while Calyx remains second favourite at 5.00 and Jash is available to back at odds of 9.00.