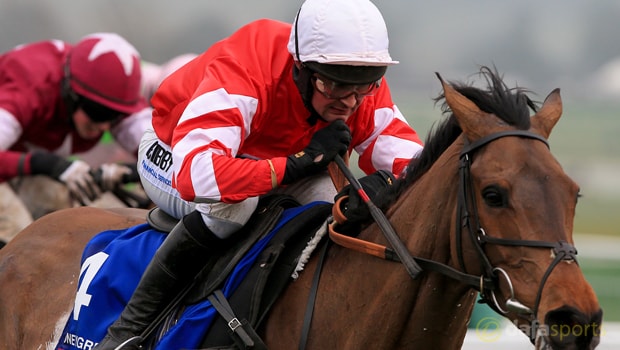 Connections of Coneygree believe the 10-year-old will be fit and ready to go as he tries to prove his doubters wrong in the Kerry National at Listowel on September 13.

The bay gelding made history back in 2015, when he became the first novice in 41 years to win the Cheltenham Gold Cup.

However, a number of injuries have derailed his progress and he has since started just three races.

Coneygree won at Sandown at the end of 2015 before finishing second and third at Haydock and Punchestown a year later.

His latest outing in Ireland showed he still has the talent to win but connections have cancelled a racecourse gallop this week.

However, Sara Bradstock, wife of trainer Mark, insists the camp are delighted with his current condition.

She told Press Association Sport: “We’re very happy with him and with two weeks to go, we’re on target for Listowel.

We were going to take him to Worcester for a gallop, but the ground was too firm.

“We’ve set up a few fences on the all-weather here at home and we’ll just have to do that. I don’t think we’ll get him away (for a gallop) now.

“He’ll have plenty of work done, though. It is very much preparation for the season and I’m sure he’ll improve, but at the same time he’ll be fit enough to do himself justice. All being well, Nico (de Boinville) will ride him.”

Coneygree looks set to carry top weight in the race but Bradstock insists that should not be an issue.

She added: “The weight won’t bother him. I think he’s carried 11st 10lb for every run since he was a novice hurdler.”