Coneygree on the comeback again

Posted by chris schweizer on September 23, 2018 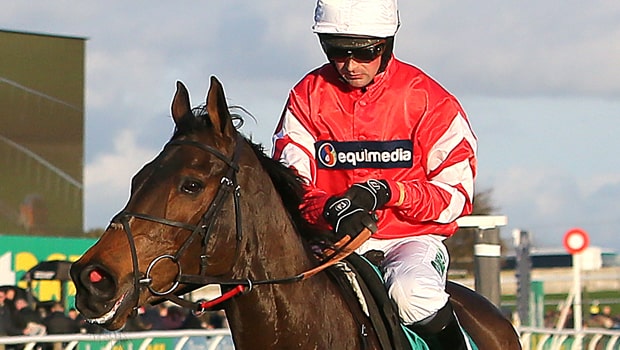 Despite a catalogue of injuries, connections of 2015 Cheltenham Gold Cup hero Coneygree are gearing up for his latest attempt to return to action.

The Mark Bradstock-trained 11-year-old has been given the JNwine.com Champion Chase at Down Royal on November 3 as a potential early-season target. Coneygree failed to get home in either start last season.

He suffered an overreach in the Charlie Hall Chase at Wetherby while his failure in the Ladbrokes Trophy at Newbury was put down to a wind issue.

It was then revealed he had suffered a stress fracture of his tibia just as he was nearing another return earlier this year.

Sara Bradstock, assistant trainer to her husband, has revealed that Coneygree, who became the first novice in 41 years to win the Cheltenham Gold Cup when he scored in March 2015, is being aimed at Down Royal.

“Coneygree is in good form and there’s a few different approaches we’re taking to try and keep him sound.

Everything is going well at the moment anyway, so fingers crossed it stays that way,” she said.

“When they’ve had a stress fracture like he did you can’t completely let them down. You have to be a bit careful, but he went out in the field for two weeks and he’s now back in fast work.”

“I think we’re probably going to start him off going right-handed, to take some pressure off his left-hind leg.

“We could look at Down Royal, or there’s the open handicap at Ascot on the same day – the Sodexo Gold Cup.

The only thing is you’d probably need a lot of rain to be running him in England, which is why we’re thinking Down Royal might be more suitable.”