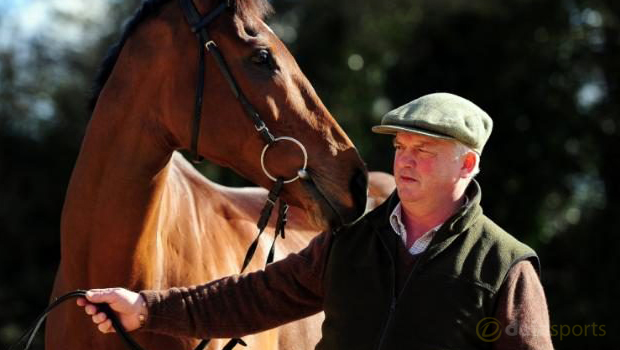 Colin Tizzard is bullish on the chances of Thistlecrack maintaining his stranglehold on the staying hurdles division in Thursday’s World Hurdle at the Cheltenham Festival.

The eight-year-old has been in devastating form this season, remaining unbeaten in three starts.

He has taken the three most high-profile trials for the World Hurdle, winning both Newbury’s Long Distance Hurdle and Ascot’s Long Walk Hurdle before Christmas.

It was at Cheltenham in January however where he produced his most powerful performance to date.

He surged clear of the field in winning the Cleeve Hurdle, shattering the myth that the Cheltenham track was not to his liking in the process.

Prior to his Cleeve success, Thistlecrack had disappointed on his sole try at Prestbury Park in a two-and-half-mile novice hurdle but his trainer had always maintained that was not his true running.

Tizzard says the horse has put the problems of his youth behind him now and he questions whether any of his 12 World Hurdle rivals will be good enough to lay a blow on him.

“Look at the betting, can you see anything getting near him?”

“In his early days we couldn’t work Thistlecrack because he kept being stiff behind but he’s been brilliant in his last five runs. He just powers away at the end of his races looking better than anything over three-miles,” said the trainer.

With the ground continuing to dry out at Cheltenham, Thistlecrack could find his chief challenge coming from last year’s World Hurdle hero Cole Harden.

His trainer, Warren Greatrex, has maintained that a return to decent ground would give Cole Harden an outstanding chance of achieving a first win since last March.

Thistlecrack is 2.25 to win the World Hurdle while Cole Harden is priced at 8.00.