Posted by chris schweizer on October 1, 2017 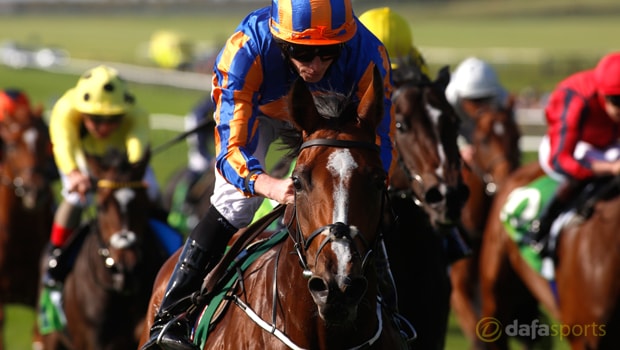 The Aidan O’Brien-trained Clemmie rubber-fastened her position as antepost favourite for the 1,000 Guineas with a determined Group 1 success in the Cheveley Park Stakes at Newmarket.

Sister to this season’s 2,000 Guineas hero Churchill, Clemmie displayed similar determination as she completed a hat-trick in the hands of Ryan Moore and bagged her first top-level success in the six-furlong contest.

Treasuring took the field along with Different League and Madeline in close attendance but Moore and Clemmie arrived on the scene with a menacing looking challenge at the two-furlong pole.

French raider Different League seemed to be travelling every bit as well but Matthieu Palussiere’s filly could not go with Clemmie in the final 100-yards and she powered home to score by a length and three-quarters.

Moore was impressed with the display and fully expects the Galileo filly to keep on improving and handle a longer trip. “She’s very, very high-class and travelled beautifully throughout.

It was a messy enough sort of race, but she always had herself in the right position, she was very comfortable and always felt in control,” said the jockey.

“Hopefully there’s more to come. It’s been a while since she ran here in the summer, she’s improved from every start and I’d say she’ll continue to do so.

She’s not stopping in her races and is giving me every indication she’ll go further.”

Trainer O’Brien says going to the Breeders’ Cup at Del Mar is still an option, if owners Coolmore wish to explore it, before Clemmie is put away for the winter.

“To be showing that kind of class over six-furlongs, you’d be over the moon. She’s very much like Churchill – she’s right in his mould.

Obviously he’s a colt and she’s a filly, but she has a great mind and plenty of speed and nothing fazes her,” he said.

“I think the lads [owners] will discuss it and see what they want to do.

She would have the option of going to America (for the Breeders’ Cup) if that’s what the lads wanted to do and she said she was happy to do that.

“A mile around there (Del Mar) on nice ground should be no problem to her.”