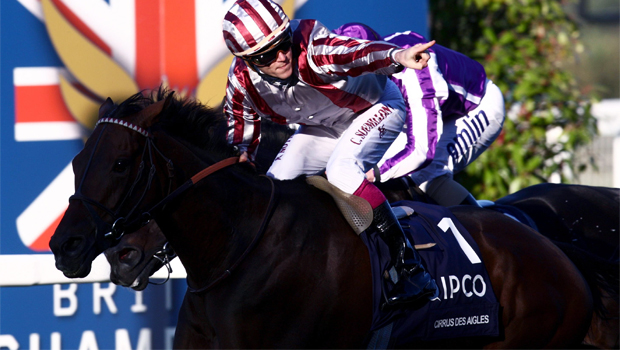 Despite suffering a third consecutive defeat at Deauville at the weekend, connections of Cirrus Des Aigles have not lost faith in him.

Trained in France by Corine Barande-Barbe, the seven-year-old is now the highest rated horse in the world after the retirement of Frankel, but in three runs this term, albeit at a high level, he has failed to produce his best form.

He suffered his second defeat at the hands of German horse Novellist in the King George VI and Queen Elizabeth Stakes at Ascot, finishing well-beaten in fourth, but was fully expected to atone in Saturday’s Group Three Prix Gontaut-Biron at Deauville.

However, he suffered an odds-on defeat to outsider Petit Chevalier, and needs to somehow recapture his form between now and another tilt at the Champion Stakes back at Ascot on 19th October.

Barande-Barbe said: “Everything is OK this morning. He has a small cut behind, probably from another horse, but it is not serious.

“I was more disappointed by the result than the performance. There was not much pace in the race and maybe he should have started his run a bit sooner, but it is not a drama that he was beaten.

“The winner was very brave and although the ground was fast, I was much happier with my horse’s action at the finish than I was at Ascot.

“I think he is still on his way up and I think he will be back to his best for the Champion Stakes – that has always been his main target this year.

“I don’t know yet where he will run between, but I think he has to run one or two more races before Ascot.”