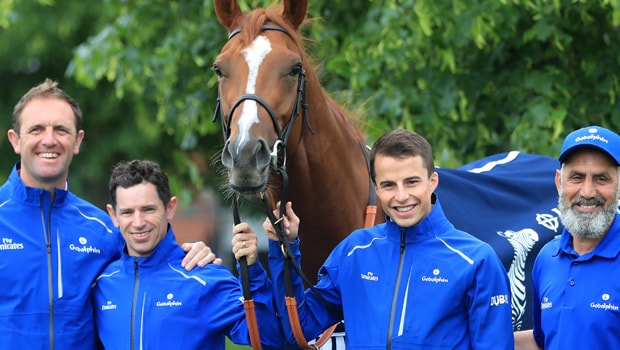 Charlie Appleby has confirmed Derby winner Masar is out for the remainder of this season, though he is being kept in training for a four-year-old return.

The Godolphin-owned colt was set to drop back in trip for the Coral-Eclipse at Sandown this month in the wake of his superb Classic-winning effort at Epsom in June.

There Masar had reversed the 2,000 Guineas form with Saxon Warrior, producing a powerful and decisive burst to win well over the longer trip at Epsom, with the Guineas winner no better than fourth behind him.

A leg problem forced him out the Eclipse, and, while the problem is not a major one, Appleby has confirmed the best course of action is to up stumps for the rest of this season. However, he is relieved Godolphin are keen to race on in 2019.

“We re-scanned him [on Saturday] evening and after discussions with His Highness Sheikh Mohammed he was keen to see him stay in training, so we felt to give him the best chance next year we would give him the rest of this season off,” said the trainer.

“He’s going to miss eight weeks now anyway and you can’t get a lead into championship race, i.e. the Arc, by missing this much time so if we wanted him to run as a four-year-old we felt he would have the best opportunity by giving him the rest of the season off.”

A return to Epsom, scene of his most spectacular performance, next summer is already being plotted.

“In time, though, we can give him the right preparation for big races such as next year’s Coronation Cup, which is over the same course and distance as the Derby,” he added.

“Other targets we will look at are the King George and the Arc [next year].”

With Masar no longer targeting the race, Enable is the favourite at 6.00 to retain her crown in the Prix de l’Arc de Triomphe at Longchamp this season.