Posted by chris schweizer on February 1, 2019 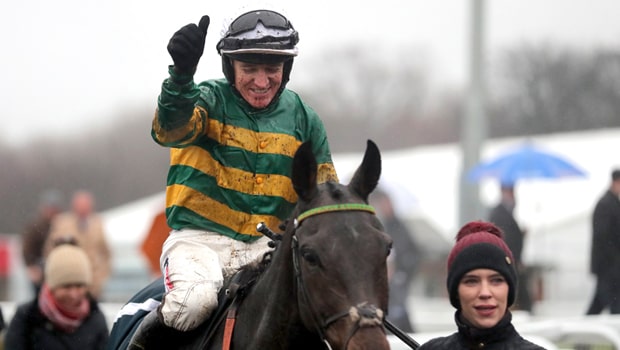 Nicky Henderson says he’ll have no regrets about not sending Buveur D’air to Ireland this weekend, even should jumps racing in Britain remain lost to the big freeze.

The two-time Champion Hurdler is in line to feature in Saturday’s Contenders Hurdle at Sandown but the card is a serious doubt due to the current weather.

There has been no jumps racing in Britain since Tuesday amid the plummeting temperatures and Saturday’s action remains very much in peril.

It will mean Buveur D’air misses a race that has become his traditional pre-Cheltenham Festival prep, with just six weeks to go until he bids for a third Champion Hurdle title.

Surprisingly beaten in the Christmas Hurdle at Kempton by stablemate Verdana Blue, Henderson concedes his plans will be thrown into disarray but he maintains no race this weekend is preferable to an ‘away fixture’ in the Irish Champion Hurdle at Leopardstown on Saturday.

The feature event on day one of the Dublin Racing Festival looks set to go ahead but Henderson and owner JP McManus have no regrets about not travelling to face the likes Apple’s Jade, Melon and Supasundae.

“I was talking to JP and about him not being in over in Ireland (Leopardstown) and I don’t regret that decision as it was not where we wanted to go,” said the Seven Barrows handler.

“The reason he is not in Ireland is that it is an away game at this stage of proceedings and only preparation for Cheltenham. We don’t want to have a dust-up there, as we can do that in March.

“I know the Contenders Hurdle is not the most awe-inspiring race when you have got a 1-5 shot in it – the only person interested in it is probably me, not because we want to win a race but because I want the horse to have a race.”

After his defeat at Christmas, Buveur D’air is the 2.38 favourite to win his third straight Champion Hurdle at Cheltenham in March.