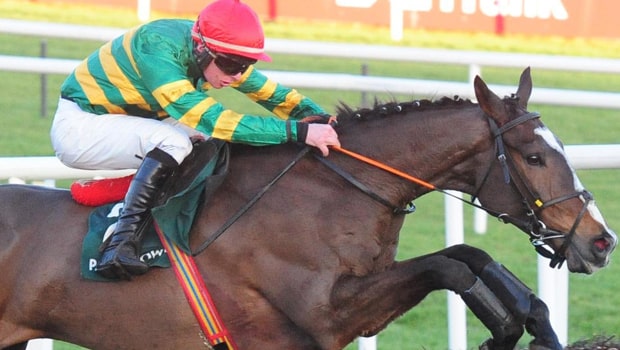 Anibale Fly is set to carry top-weight in the Grand National at Aintree next weekend after Bristol De Mai was scratched from the Merseyside showpiece.

The Nigel Twiston-Davies-trained grey was due to carry the burden of 11st 10lb in the world’s most famous steeplechase but the Naunton handler feels he’ll be best served running instead in the Grade One Betway Bowl on day one of the Aintree meeting instead.

Bristol De Mai finished a fine third behind Al Boum Photo and Anibale Fly in the Cheltenham Gold Cup earlier this month and that was enough to ensure his handler had a rethink on the target for the multiple Grade One winner.

“He’s fine and the plan is to run in the Bowl,” Twiston-Davies. “It was just decided that on his Gold Cup form he ought to win the Bowl and it’s possibly the easier option.”

Bristol De Mai was fifth in the Aintree Bowl two years ago and second last season behind Might Bite. His defection from the National ensures the weights for the race will climb to the tune of 4lb for everything else.

Tony Martin’s Anibale Fly becomes the new top-weight and last year’s winner Tiger Roll will now be carrying 11st5lb in his bid to bridge a 45-year gap in becoming a back-to-back winner. Despite his burden, the JP McManus owned Anibale Fly, fourth in the race last year, is firmly on course for Merseyside.

“The plan is to run at the minute, all being well,” said Frank Berry, racing manager to the owner.

“He ran a fantastic race in the Gold Cup. Tony is happy with him. It’s a big ask with top-weight, but hopefully he’ll be doing a bit of work at the weekend and if all goes well he’ll arrive there.”

Tiger Roll is 5.00 to win a second Grand National at Aintree next week, while Anibale Fly is priced at 11.00.